You know we’ve been looking at some good shorts for the past few days, and I think it’s time we cut that shit out. This is the Internet for God’s sake, no one comes to film blogs looking for positivity. They want someone taking the piss out of shitty knockoffs! And nothing says “shitty knockoff” like the name Happy Harmonies, does it? So let’s take a look at Rudolf Isling’s 1935 entry in that storied series, The Calico Dragon. 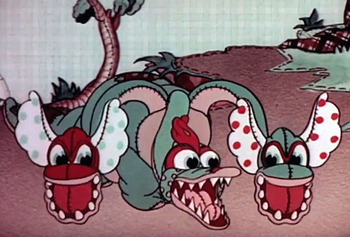 Perhaps the most frustrating thing about The Calico Dragon is that it didn't have to suck. The premise is a pretty solid one, after all. A young girl reads herself a fairy tale, and then imagines her toys coming to life and going on an adventure of their own. One could easily make a good film out of that! People have made good films out of that. Great ones, even! Many times! But as we've seen before, it's possible to make a bad film with that premise as well. And it's hard to imagine a much worse take on this idea than The Calico Dragon. I mean, I guess it's not that hard; if this short were actively racist, it'd probably be worse. How's that for a pull quote? "The Calico Dragon- Not Actively Racist!" Faint praise, to be sure. But that's about the extent of any goodwill I have for this annoying, poorly animated and incredibly boring film.

While I suppose I should go into more detail onto why this short stinks so much, I think it's fairly self-evident. And beyond that, I'd only be repeating myself. While the 1930s were by no means a bad year for animation, the fact remains that a great deal of shorts we've looked at from that decade were pretty wretched. And beyond that, they were all bad in pretty much the same ways. The overly detailed character animation which tries to look cute but swings around to being horrifying. The mediocre voice acting. The generic songs with lyrics you can barely understand. And above all else, the aimless, poorly-paced stories which go nowhere and don't so much end as they just stop. It would be one thing if these shorts were funny, but they're not. Hell, most of them don't even try to be. Did The Calico Dragon have anything resembling an actual joke? And random bouncing around doesn't count! The Calico Dragon is bad in a way that pretty much all bad shorts from the 30s were bad. While animated shorts in the future would have their own problems, at least they moved on from this sort of thing.

I am sure that, at some point in his illustrious career, Rudolf Isling directed a good short. Just as I'm sure that Hugh Harman produced some quality ones as well. The fact that the only films of theirs we've covered have been crappy should not be seen as an indictment on their legacy, but really just sign that the Academy often has shitty taste. I assume that must have been the case for the 8th Academy Awards at any rate, as far as animation is concerned. Between this short, Who Killed Cock Robin? and that year's winner, Three Orphan Kittens, it was not a good year for that category. Maybe it was a bad year for animation in general, who knows? But I kind of doubt it.

Update- I recently realized that Hugh Harman was responsible for Peace on Earth and Good Will to Men, which might not be GREAT shorts, but they're still better than this. And Rudolf Isling was involved in some early Tom and Jerry films, so there you go. I knew they were alright in the end!