I don’t know if you guys have heard of this little thing called capitalism, but it’s sort of the worst. Between the exploitation of labor, the damage done to the environment and the endless proliferation of Ryan Murphy shows, there’s not a lot to recommend. And not surprisingly, there have been a lot of films exploring that fact lately, to varying degrees of effectiveness and subtlety. Some of those films have even won Oscars! But of course capitalism isn’t new, nor are filmed critiques of it. Today’s short, Mark Osborne’s More, is just one in a long line of films to tackle the economic system we all know and tolerate. 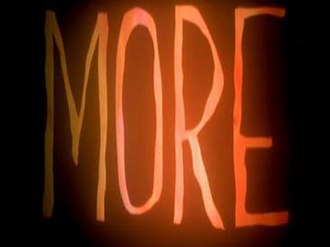 Mark Osborne may not be a household name, but he's certainly had a long and interesting career in the field of animation. His first directorial credit was for the music video for Weird Al's "Jurassic Park", which I believe makes him the second Weird Al director whose work we've covered in our Year in Shorts. That alone qualifies him as a legend in my books, but he also went on to direct the live action sequences for several SpongeBob episodes (as well as the movie) and co-directed Kung Fu Panda. But despite all that, More might be his best work. Released in 1998, it follows an unnamed factory worker who lives in a dystopian hellscape, who secretly works on an invention called "Bliss" which will allow him (and others) to escape from their dreary lives. But success might wind up costing the inventor more than he expected. What follows is an eerie, interesting and melancholy piece of science fiction, complete with great stop motion animation and a moody score by New Order. It's good stuff is what I'm trying to say.

More certainly isn't a subtle short, but it doesn't really need to be. Allegories work better when they're a little more blunt, and plenty of great films have been made which deliver their message with the nuance of a sledgehammer. Besides, subtlety isn't everything, especially with a film as well-made as this one. As is often the case in stop motion films, the animation is the real star of the show, and there's certainly a lot to praise in that department here. The character designs are unique and surprisingly expressive, considering the fact that they're all grey blobs, and the film oozes with atmosphere. Sure, a lot of the sets are stark and simplistic, but that's sort of the point, you know? As a short with no real dialogue to speak of, the animation is more important than ever, and Osborne proves himself to be up to the challenge of telling a story through visuals. It's aided in no small part by the score which manages to enhance the film in spite of having several elements which typically annoy me. Yes, it's repetitive, and yes, it's electronic. But a repetitive score in a six minute short is forgivable if the melody is good and helps drive the film forward, which is certainly the case here. And once again, the cold, soulless feeling inherent in electronic scores is perfectly appropriate here. More seems to be one of the more well-liked shorts we've covered around here (if IMDb user ratings are anything to go by anyway), and it's not hard to see why.

What is hard to see is why the Academy didn't award it the Oscar. In spite of everything More has going with it, the award went instead to Chis Wedge's Bunny, despite it being nowhere near as good. Why that is I can't say. Perhaps computer animation still seemed novel in those days compared to more "old-fashioned" techniques like stop motion. Still, I guess it could be worse. I might not particularly like Bunny, but it's certainly unique! If More had to lose to something, at least it wasn't something more commercial. That's not nothing!