A long time ago, in the early months of our Year in Shorts, we looked at Gone Nutty, the first short to feature Scrat, the most beloved character from the Ice Age franchise. But while Scrat would go on to appear in three more subsequent short films (not nearly enough, if you ask me- maybe you could do something about that now that you own everything, Disney!), only one would receive another Oscar nomination. But luckily for us, it’s a damn good one, with 2006’s No Time for Nuts. 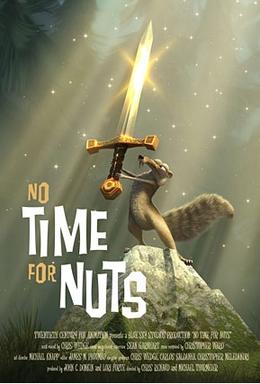 Directed by Chris Renaud and Mike Thurmeier, No Time for Nuts was released on DVD with copies of Ice Age: The Meltdown, thereby giving people a reason to own a copy of Ice Age: The Meltdown. The short starts off like a typical Scrat adventure, with everyone's favorite saber-toothed squirrel looking for a place to store his acorn. However, things take a turn when Scrat's digging causes him to stumble upon a frozen time machine (as well as the frozen corpse of its inventor), which goes off and sends his acorn into the future. Desperate to get it back, Scrat sets off on a time-hopping adventure, finding himself going through various important historical events, from the sinking of the Titanic to the release of the first Ice Age. It's all good silly fun, containing all the slapstick comedy, cartoon absurdism and thought-provoking examinations of the cost of hubris one would expect from a Scrat short. It doesn't necessarily reinvent the wheel, but why mess with a formula that's proven to work? Instead, No Time for Nuts just improves upon everything that came before. The animation is better, the jokes come quicker, and the gags on the whole are a lot more various and creative than before. That's hardly surprising of course- the premise basically requires that to be the case- but it's appreciated nevertheless.

Cartoons like this used to be a lot more common. Hell, judging by a lot of the films we've looked at, it seemed like that's what pretty much every cartoon was- fast-paced jokes, simple storylines and characters going through a great deal of pain. Animated films have certainly gotten more complex since then, and that's a good thing! But that doesn't mean there isn't a place for old-fashioned fare, especially when it's as clever and well-executed as this one. It might not be great art (and it's no surprise it didn't win the Oscar), but it's certainly great fun. If it seems like I haven't spent a lot of time talking about the short, well... really, what else is there to say? Some films are better left speaking for themselves, and No Time for Nuts is definitely one of them.