In the annals of modern animation, few characters are as underappreciated as Scrat the Saber-Toothed Squirrel. Making his debut in the feature film Ice Age, Scrat is a neverending source of comic delight, and it's time he got the recognition he deserves. Ever since Ice Age was released, Scrat has gone on to star in some of his own shorts, starting with 2002’s Gone Nutty. 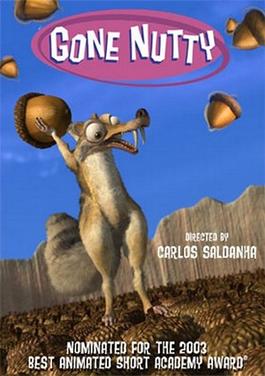 Gone Nutty, like all Scrat shorts, follows everyone's favorite prehistoric squirrel in his attempts to acquire and store enough acorns so he can survive the Ice Age. The short, directed by Carlos Saldanha, is very simple but effective. Scrat belongs to the same honored tradition of unlucky animated characters like Wile E. Coyote or Tom of Tom and Jerry fame, except Scrat's only nemeses are his own personality flaws and the forces of nature itself.

As you can see, Scrat leads a very complicated life.

While Gone Nutty is not a great short, it's still a great deal of fun and well worth the five minutes it'll take to watch it. It serves as a throwback to a simpler time in animation when all you needed was a starving animal being subjected to a series of misfortunes to make people laugh. Comedy gold, that's what that is. Scrat may not be as prolific as other great animated heroes, but he's always entertaining to watch.