A Year in Shorts Day 316: "History of the World in Three Minutes Flat"

A couple weeks ago we took a look at Grasshoppers, a short which condensed the history of the world into a pretty cynical ten minutes. In that post I mentioned that today’s short, History of the World in Three Minutes Flat, is a better (and, obviously, shorter) take on the same subject. And that’s certainly true. But is it much better? Well no. But let’s look at it anyway. 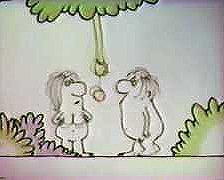 Released in the far flung year of 1980, Michael Mills' History of the World in Three Minutes Flat is another fairly obscure short for us. In spite of all the awards it received (including the presumably coveted Short Film Golden Bear at the Berlin International Film Festival), there really isn't a lot of information or critical writing on this short available online. As such, I once again find myself in the unique positions of quite possibly writing the most detailed piece of criticism on a film and potentially writing a piece that will take longer to read than it will to watch the movie. These are certainly not responsibilities I take lightly. Much like Grasshoppers a decade after it, History of the World in Three Minutes Flat takes an ultra condensed look at human history, beginning with the story of Adam and Eve and culminating in the Cold War. Unlike Grasshoppers, Mills focuses on more than just warfare, also showing off great moments in science and culture. This does admittedly result in the short having less thematic consistency, but it certainly makes it slightly more pleasant to watch.

And really this short certainly needs the help. While History of the World in Three Minutes Flat is certainly better than Grasshoppers by just about every conceivable metric, that's not saying much. Sure, the animation is better, but it's still pretty ugly and cheap-looking. (The fact that it is intentionally so doesn't make it any more fun to watch.) There may be more variety in the jokes, but that doesn't make any of them funny. And while it's not as repetitive as Grasshoppers, the fact remains that, at the end of the day, the short is still just a series of loosely connected events crammed together without any thought to structure or pacing. I was not a huge fan of The Fly, the short which would win the Oscar that year, but at least that film had an identity. It was doing something unique, and it did that well enough. Shorts like History of the World in Three Minutes Flat, which are mostly a series of gags thrown together with a vague point to them, don't really do anything for me. Especially if the gags aren't particularly funny or original, as it the case here.

Still, History of the World in Three Minutes Flat has one thing going for it- it's short. At five seconds under the promised runtime, this film at the very least can't be accused of overstaying its welcome. And while that certainly doesn't count for a lot, the fact that Mills had the decency not to stretch his premise too thin is appreciated. I certainly can't say I recommend this short; unless you too have the futile goal of seeing every Oscar-nominated film in existence (or have very little time to cram for your world history final), there isn't much reason to watch it. But if for some reason you do choose to, at least it won't be too painful. It's kind of annoying, but at least it doesn't annoy you for long.