A Year in Shorts Day 302: "Grasshoppers"

Despite the important position Italy holds in the world of cinema, our Year in Shorts has actually covered surprisingly few Italian films. In fact, the list of Italian short nominees is so sparse that Wikipedia artificially pads the list by including Walter Lantz’s various nominated shorts on the grounds that he’s an Italian-born director, which isn’t even true. Really the only actual Italian short we’ve looked at is Senza parole, although I suppose you can count La Luna as being made by an Italian filmmaker. Why do I bring all this up? Well, because today’s short, Bruno Bozzetto's Grasshoppers (or Cavallette, if you’re fancy) is another Italian short for us to discuss. And frankly, that’s the only thing that’s really interesting about it! 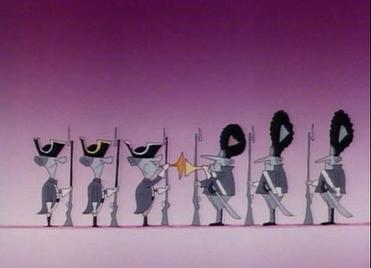 Well, I guess that's not entirely fair. The premise, on its own, is certainly promising, if not exactly original. The film seeks to tell the history of the human race, starting with the invention of fire and ending with the then present day of 1990, focusing primarily on all the violence running throughout it. From wars to witch burnings, this short covers just about every type of violent act you can think of, with cycles of violence interspersed with shots of nature reclaiming the land, represented by a field populated by grasshoppers. It is an exceedingly cynical short, and not a unique one either; ten years earlier, Michael Mills' History of the World in Three Minutes Flat covered similar ground in one third the time. Still, originality only gets you so far, and with good execution, even the most well worn concept can seem fresh and exciting. Unfortunately, that's not the case here.

Whatever potential Grasshoppers had it pretty quickly squanders, and never really recovers. The humor throughout the short is pretty juvenile, relying mostly on acts violence and the occasional racial stereotype to try and get a laugh. Now, you all know I love me some cartoon violence (cartoon racism, not so much), but typically there should be some sort of wit or creativity involved. Failing that, you can always just go over-the-top and ridiculous with it, which might at least provide some shock value. But Grasshoppers has none of those things, and it gets old fast. Scenes of people bloodlessly stabbing and shooting each other might be amusing for a couple minutes, but you have to provide me with more than that if you're asking me to sit through a nine minute short. Perhaps the repetition wouldn't be such an issue if the animation were any good, but I can't say Bozzetto's style does anything for me. I can see, in theory, why it would work for some people- Lord knows the minimalist style and cartoony look has been done well before- but I just find it a little ugly and extremely boring. It probably doesn't help that all those Red Bull ads have a remarkably similar aesthetic, so the whole short has a weird "TV commercial" aspect to it. Granted, those Red Bull ads are typically only thirty seconds long, so at least they've got that going for it.

Perhaps the most noteworthy thing about Grasshoppers is that, of the three nominees for Best Animated Short at the 63rd Academy Awards, it was the only film not directed by Nick Park. The other nominees were the previously covered A Grand Day Out and the Oscar-winning Creature Comforts. When compared to those two shorts, Grasshoppers is so thoroughly outclassed it's a little embarrassing. Nick Park and Aardman managed to create two shorts which have stood the test of time, combining high quality stop motion animation with clever comedy and original stories. Grasshoppers, meanwhile, does nothing we haven't seen before, and it does it pretty badly. Unless you count the shot at the end of two grasshoppers fucking. I guess that was pretty original.