A Year in Shorts Day 315: "The Truth About Mother Goose"

We all like to scoff at educational cartoons, but as we’ve seen several times throughout our Year of Shorts, they can be perfectly entertaining. Disney in particular seemed to want to use their cartoons for educational purposes throughout the 1950s. And today’s short, The Truth About Mother Goose might very well be the best of the lot. So get ready to take some notes in case there’s a test later, folks- class is now in session. 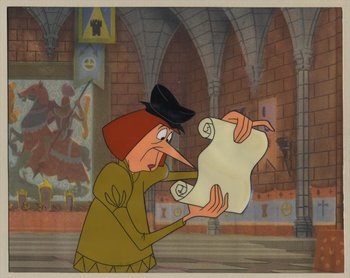 As you've no doubt gathered from the title, The Truth About Mother Goose is a short covering the origins and meanings behind three famous nursery rhymes- "Little Jack Horner", "Mary, Mary, Quite Contrary" and "London Bridge is Falling Down." (Well, alleged origins, at any rate; no one knows for sure where these nursery rhymes come from, so this short may not be that educational.) Released in 1957, The Truth About Mother Goose is a fairly obscure short now, perhaps most noteworthy for being the directorial debut of Wolfgang Reitherman, who would become a more prominent figure in the studio during the 60s and 70s. (The short was co-directed by Bill Justice, who didn't gain nearly as much prominence as Reitherman, but still had a fruitful career at Disney.) On the one hand, it's understandable why this short is not one of Disney's better-remembered films. People aren't particularly likely to seek out educational cartoons on their own time, and as such the ones that endure are the ones which get shown to them, usually in class. And while shorts about the various types of musical instruments or the applications of mathematics have clear educational uses, a film about the questionably accurate origins of nursery rhymes is not as easily justified by hungover teachers just trying to take a god damn day off. Do kids even study nursery rhymes in school these days? Or ever? Fairy tales or tall tales, sure. But nursery rhymes? That's strictly preschool, methinks.

And that's a damn shame, because there's a hell of a lot to like here. The Truth About Mother Goose is peak 50s Disney, which you know I consider to be high praise. For starters is the music, performed by a trio of jazz-singing jesters voiced by the Page Cavanaugh Trio. While they might not be the Mellomen, they're still a welcome presence, filling the short with a laid back energy and catchy music. They even perform dark reprises of all the nursery rhymes after the truth behind them is revealed, which is pretty damn fun. Even better is the narration by John Dehner (best known to me as Captain Allenby in "The Lonely", one of the best episodes of The Twilight Zone), who has the perfect voice for this sort of thing, warm and paternal, but with a slight caustic wit that helps sell the dark humor running throughout the short. If you ever wanted to watch a Disney short in which people are decapitated and blown up, this is the film for you. 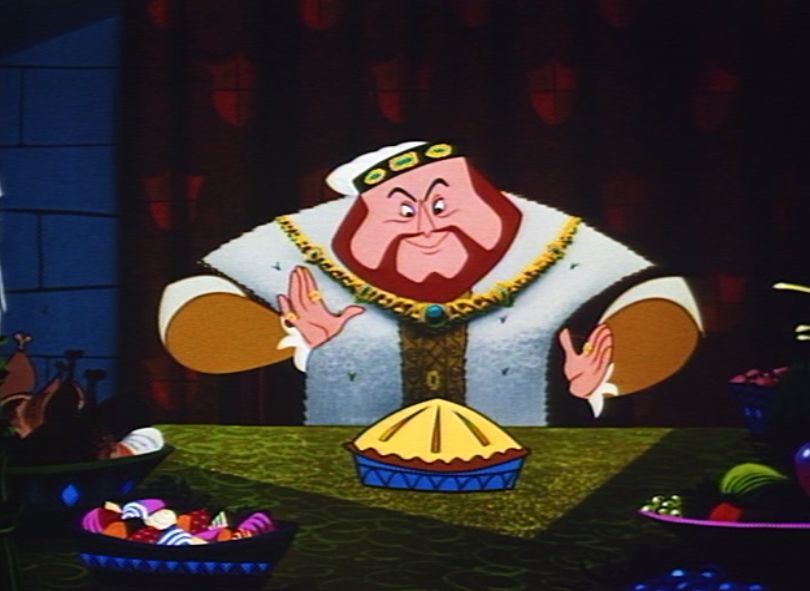 While they might not be strictly accurate, the stories presented by the short are nevertheless perfectly engaging in their own right. The Jack Horner story might be a little boring (it's mercifully the shortest), but the story of Mary, Queen of Scots is interesting enough. And the history of London Bridge is truly fascinating, filled to the brim with strange details and fun trivia. Did you know they had jousting tournaments on the bridge? Or that ships crashed into it constantly? I certainly didn't! It's such an amazing setting that it's frankly remarkable that it hasn't been explored in media more frequently. I could honestly watch a whole movie set on London Bridge, but I'll make do with the fact that it takes up half the short instead. I don't know what it is, but there's something about that segment of the film which really captured my imagination. Maybe you don't find that sort of thing interesting, but if you're weird like me, there's a lot about this short you're going to love! 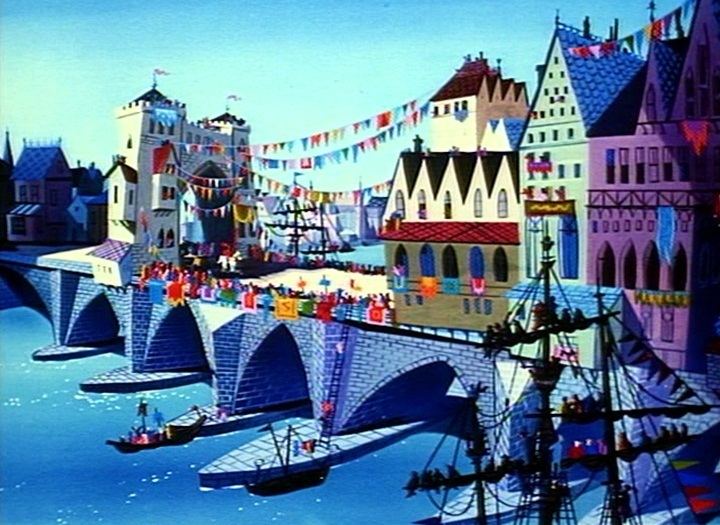 But better than all that is the animation, which once again perfectly demonstrates why the 50s Disney aesthetic is the superior one. This short came out two years before Sleeping Beauty (which Reitherman was a sequence director on), and you can see a lot of what made that the best-looking Disney film on display here. From the gorgeous use of dark colors, dynamic action animation and exaggerated character designs, this is one of the best-looking Disney shorts we've covered. While a lot of the backgrounds may be simple, the animators didn't use that as an excuse to cut corners, producing some truly bizarre and memorable images. And the more traditional painted backgrounds are as lovely as ever, but still containing that off-kilter energy which makes the Disney films from this era so memorable. There's also a great deal of clever visual gags, such as the artist accidentally painting fire onto his canvas or the deaths of Queen Mary's various paramours. Free from the realistic aesthetic which defined the studio in decades prior, Disney's animators really took this opportunity to experiment with form in a way that's fresh and exciting.

Of all the Disney shorts we've covered, The Truth About Mother Goose is definitely the most underseen and underappreciated. It's by far the best of the nominated shorts that year, even if doesn't quite match up with the unforgivably snubbed What's Opera, Doc? But then again, what could? This short contains plenty of what I love about this era of Disney animation, and it's always a pleasure to revisit it. And it's infinitely better than the unforgivably nominated Trees and Jamaica Daddy!