If there’s one thing regular readers of this blog should know about me by now, it’s that I have no great love for Sylvester and Tweety shorts. Even setting aside the fact that Tweety Bird is an obnoxious character, and allowing for the few shorts of theirs I’ve enjoyed, there’s no getting around the fact that they are, at the end of the day, just the poor man’s Tom and Jerry. But as bad as that is, it can always be worse- imagining being the poor man’s Sylvester and Tweety. Enter today’s short, Howard Swift’s Dog, Cat and Canary, to help add a little perspective to the whole affair. 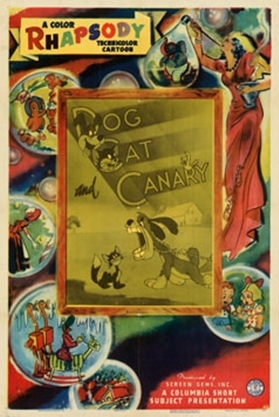 Directed by Howard Smith and released in 1945, Dog, Cat and Canary is a part of Columbia's Color Rhapsody series, which is already a bad sign if you ask me. Have any of the Color Rhapsodies been worth a damn? At any rate, the premise is a fairly straightforward one- a stray cat is on the hunt when it spots a canary in a nearby yard. (The fact that the cat is black and white like Sylvester and the bird is yellow like Tweety is probably just a coincidence.) Unfortunately for the cat, the canary's owners also have a guard dog tied up in their yard. So the stakes are pretty firmly established- the cat wants to eat the bird, the dog doesn't want to let them, a great deal of hijinks ensue. Is any of it funny? No. Is it at least passably amusing? Also no. Is there anything about this short that makes it worth watching? Well, I'll let you figure out that one for yourself.

From the lame gags to the cheap, ugly animation, it's hard to believe Dog, Cat and Canary is a real cartoon from the 40s. More than anything it feels like a parody of old cartoons, something stupid a character in a TV show might be watching to show how stupid they are. Lacking in the wit, energy or artistry that other companies could produce in their sleep, Dog, Cat and Canary offers nothing but some lackluster slapstick and poorly designed cartoon animals. (Seriously, that dog is hideous.) The only good to come out of this short is that it makes you appreciate how truly great those Warner Bros., MGM or Disney cartoons were. Seriously, compare Dog, Cat and Canary to some of the shorts it was competing against; the difference is striking. Mouse Trouble? Everything this short wishes it could be. How to Play Football? Frankly insulting that the Academy thought they were remotely on the same level. Swooner Crooner? Well, ok that short was bad, and pretty racist, but I mean... well there was clearly a lot more effort put into one than the other, you know? Fish Fry? Totally forgettable, but at least it wasn't ugly to look at. You see what you've done, Dog, Cat and Canary? You've made me say something nice about Walter Lantz! I feel like I need to take a shower.

Dog, Cat and Canary is not the worst short we've covered, but that's only because it lacks the ambition and originality it takes to make a truly awful film. No, instead Dog, Cat and Canary has to settle for being mediocre and forgettable, which is arguably worse. Still, I'm grateful for it. Watching this short made me realize that perhaps I've been a little too harsh on Sylvester and Tweety this past year. Sure, Tweety's an annoying little shit, but at least he's got an identity. Yeah, they might not have the best gags, but at least there's some variety to them, and they generally have some pretty good setup and payoff structures, not just formless violence. And the animation, my God the animation! So much livelier and more beautiful! Even the worst Looney Tunes shorts have infinitely more to offer than Dog, Cat and Canary. So while Tweety remains my mortal enemy, at least he's an enemy I can respect.