We’ve covered films featuring plenty of the classic Disney characters in our Year in Shorts. We’ve looked at films with Mickey, films with Pluto, films with Chip and Dale and plenty of films with Donald Duck. (We haven’t covered any films with Winnie-the-Pooh as of yet; we’ll be getting to those whenever ANOTHER Year of Shorts rolls around.) But we’ve only looked at one film featuring Goofy. That changes today as we talk about Goofy’s other Oscar-nominated short, the 1944 comedy classic, How to Play Football. 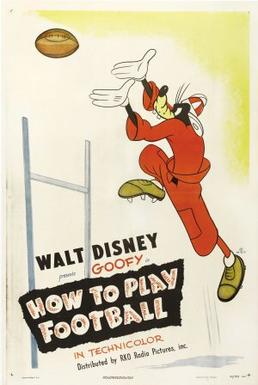 As you can guess from the title, Jack Kinney's How to Play Football takes the form of a faux instructional video, which already puts it in my good graces. How to Play Football is actually an entry in a long series of "How To" shorts starring Goofy. While these films seem to be the most beloved of Goofy's films, they were originally born out of necessity more than anything else. In 1938, Pinto Colvig (Goofy's regular voice actor) quite Disney to work for Fleischer, and Disney had to come up with a way to make Goofy shorts without him. The solution was the "How To" shorts, first tested out with 1941's The Art of Skiing and officially debuting with 1942's How to Play Baseball, which, interestingly enough, was rushed into production to play before The Pride of the Yankees. Imagine if Disney still did that today! I'd be a lot more inclined to see a sports movie if they had a Goofy short playing before them. Wouldn't Ford v. Ferrari have been better if it had been preceded by How to Be a Grand Prix Racer? Can you imagine how great it would have been to see a short called How to Box played in front of Creed? And there's no doubt in my mind that a short called How to Recruit a Baseball Team would be by far the most entertaining part of seeing Moneyball. 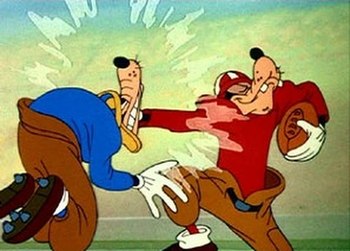 But I digress. All these shorts follow a pretty basic formula- Goofy would try out various hobbies as a narrator explains the proper way to do them. Judging by the number of shorts they'd make in this format, it certainly paid off well for Disney, even if it couldn't have felt great for Pinto Colvig to know how easily he could be replaced. Imagine that, Disney making an employee feel undervalued. At any rate, his issues with Disney eventually got patched up, and he would return to voicing Goofy before long. But the "How To" shorts would continue, culminating in How to Play Football, generally considered to be the best of the series, remaining one of the most popular Goofy shorts to this day. And really, it's not very hard to see why. Whereas for the most part Disney shorts were known for their state-of-the-art animation and cutesy animals, they could be downright hilarious when they put their minds to it. And How to Play Football is just about as hilarious as it gets. So I guess I should stop goofing around and get to discussing the short itself! 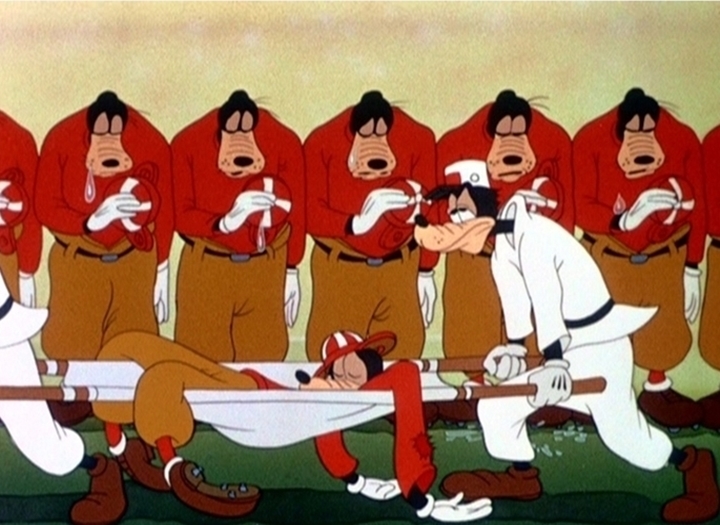 As the narrator (a spirited Billy Bletcher) introduces us to the basics, a crowd of players, band members and fans (all played by Goofy) swarm the field. It's important to note that How to Play Football was released at a time when football was exclusively a college sport, so some of the information and uniforms are a bit outdated. Of course, if you're watching this film to actually learn how to play football, you might be in a bit of trouble. That said, you don't have to be a football expert to follow the short either. It certainly helps- there are some pretty funny gags about how ridiculous and complicated the game really is- but for the most part the short just uses football as an excuse to throw in as many sight gags as the animators can think of. And it turns out they can think of quite a lot! This short is filled with a lot of great physical comedy, from violent slapstick, absurd body proportions and exaggerated expressions, and just downright absurd cartoon physics. Although this kind of comedy isn't uncommon for animated shorts from those days, it isn't something you typically see in a Disney short. Oh sure, Donald might get a little crazy every now and again, but never quite like this. If it weren't for the fact that the short has a herd of Goofies running around, you might be forgiven for thinking it's a Warner Bros. short. I guess, much like The Emperor's New Groove, it proves that Disney doing Warner Bros. makes for a classic cartoon.

Helping sell the entire thing is Billy Bletcher's narration, which manages to provide a ton of energy to the short without ever getting too over-the-top. Bletcher knows just the right level to deliver his lines, keeping things interesting with ruining the joke. He's a perfect straight man for the absurdity happening on screen, allowing the gags to shine by underplaying his reaction. This is just another ordinary football game, apparently. All of this, combined with some truly top notch animation, makes for a truly great short. (I can see why some might have complaints with the animation in this- there are definitely a couple of moments which seem to be animated in such a way to save time and money- but I'm standing firm. In addition to the great bits of physical comedy, the painted backgrounds are really lovely, as are the painted tableaus sprinkled throughout.) This is one of those rare films which I feel comfortable recommending to just about everyone. And honestly, me talking about it has really done it no justice. This is just one of those films you need to see for yourself.

But as great as How to Play Football is, it couldn't quite secure itself the Oscar, losing out to the Tom and Jerry short Mouse Trouble. Before our Year in Shorts began, I would have felt that was the correct decision. But now I have to admit that I think How to Play Football was a worthier choice. Still, in the grand scheme of things, it's hard to complain. Both are some damn funny shorts filled with a lot of great physical comedy and quality animation. So if you haven't seen How to Play Football, check it out! And if you have... well, maybe watch Mouse Trouble again. Or hell, watch both! These are crazy times, and I think we all deserve a laugh or two. And those shorts are more than enough to deliver.

"How to Play Football" is available to watch on Disney +