Does anyone really like Foghorn Leghorn? He doesn’t seem to have many fans, and yet he’s remained remarkably popular over the years. Maybe people just love the way he says, “I say, I say”; he’s certainly one of the easier Looney Tunes to imitate. Or perhaps he does have a legion of dedicated followers. Who's to say? Whatever the case, it seems the Academy didn’t care for him too much. Of all the Foghorn Leghorn shorts to get released, only one received a nomination, his 1946 debut, Walky Talky Hawky. 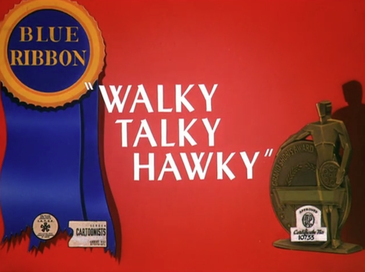 Much like the recently covered Tabasco Road, Walky Talky Hawky was directed by Bob McKimson; if I had been a little more careful with my planning, I would have avoided putting two of his shorts so close together, but mapping out an entire year's worth of shorts is difficult, and I've only got so much room to kick a short down the road remaining. Anyway, in addition to featuring the debut of Foghorn Leghorn, Walky Talky Hawky also stars Barnyard Dawg (also making his debut here, apparently cementing his status as Foghorn Leghorn's archnemesis) and Henery Hawk, who had previously made an appearance in The Squawkin' Hawk. In case it isn't abundantly clear by now, I have very little experience with Foghorn Leghorn cartoons, so I won't be able to tell you how this compares with the rest of the shorts in the series. But at the same time, that's kind of perfect for this review. After all, audiences were getting introduced to Foghorn Leghorn through this short; they didn't know what to expect from him, and neither do I! Sometimes it's nice to work with a clean slate, isn't it? 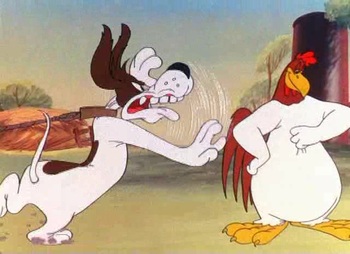 The short opens in the Hawk household, in which Henery's father let's him in on a terrible family secret- they're a family of chicken hawks, which makes them outcasts in bird society. (This is not, strictly speaking, cannibalism, so no extra credit there, but I still appreciate the effort to spice things up.) Seeking to satisfy his cravings, Henery flies down to the barnyard to find himself a chicken, except there's one problem- he doesn't know what a chicken is. Upon discovering this, Foghorn Leghorn (who sounds an awful lot like Yosemite Sam in this short) decides to use this as an opportunity to get rid of his rival, informing Henery that Barnyard Dawg is what he's after. What follows is more or less what you expect- Henery tries to find ways to eat Barnyard Dawg and Barnyard Dawg fights back, with all the Looney Tunes-style violence (ok, technically Merrie Melodies-style violence, in this case) you'd expect. Except it's a little bit more complicated than that. As Barnyard Dawg is on a leash, he's never actually able to get the upper hand on Henery, who always evades him. And then when he's downed, Foghorn swoops in to mess with him even further. Now, I'm certainly not saying you can't make a short with three opponents instead of two (take a look at Chuck Jones' famous "Hunting Trilogy" for evidence to the contrary), but you do have to work a little harder. Shorts like that require a great deal of discipline to pull off, which might explain why they were more common in the 1950s, when the Looney Tunes were ever-so-slightly more orderly in their hijinks. But Walky Talky Hawky is just a little too loosey-goosey; rather than feeling delightfully chaotic, it just comes across as messy.

Which really wouldn't be an issue if the gags in this short were worth it. And, to be sure, there are amusing moments and clever jokes sprinkled throughout. But none of them are particularly funny. Regular readers should know by now that I am a huge fan of cartoon violence, but the thing I love the most about it is how creative and over-the-top it can get. So it's rather disappointing that Walky Talky Hawky plays it so safe. It's certainly not realistic by any stretch, and yet there's a mundane quality to Henery's plans that render the gags pretty inert, especially compared to similar shorts from the time. At best, they're good for a momentary chuckle. At worst, they're downright aggravating. There is only so much of Barynard Dawg's barking or Foghorn's clucking like one can take, and it turns out that amount is very little. For the most part, there's nothing particularly wrong with the jokes in this short; they're pleasant and inoffensive. (I'm pretty sure there's nothing racist about Foghorn Leghorn, although I'm sure someone out there is willing to prove me wrong.) But none of them are inspired, and that's really just what we should expect from our Warner Bros. cartoons. It might seem unfair, but that's the danger of setting the bar too high.

But I think a larger, if less immediate problem, with this short is that none of the characters are particularly interesting. Henery is just a generic tough guy, with the joke being that he doesn't have the size to back it up. Still, at least he has something of a personality. Foghorn Leghorn is just an asshole, and Barynard Dawg is... well, really just a dog, with barely more of an identity than Pluto. (He at least looks slightly less disturbing.) Hell, even his name is generic! Who are we supposed to be rooting for here? What personality trait are we meant to latch onto? While it is true that the Looney Tunes may not be as complex of characters as, say, The Muppets, they nevertheless are characters. That's what sets them apart from the imitators. In the best Looney Tunes shorts, gags aren't there just for the sake of a laugh; they come from the various characters' personalities. Whether it's Bugs' impish sense of humor, Daffy's endless well of rage and resentment, Elmer's stupidity and repressed lust for Bugs Bunny... the list goes on and on. But in Walky Talky Hawky, there's really nothing driving the chaos other than the fact that this is a Merrie Melodies short, and Merrie Melodies shorts have slapstick humor. Perhaps that's why none of the gags land as well as they should; they feel perfunctory more than anything. As I said before, I'm not familiar with Foghorn Leghorn's filmography. And frankly, nothing about this short makes me interested in seeing more. 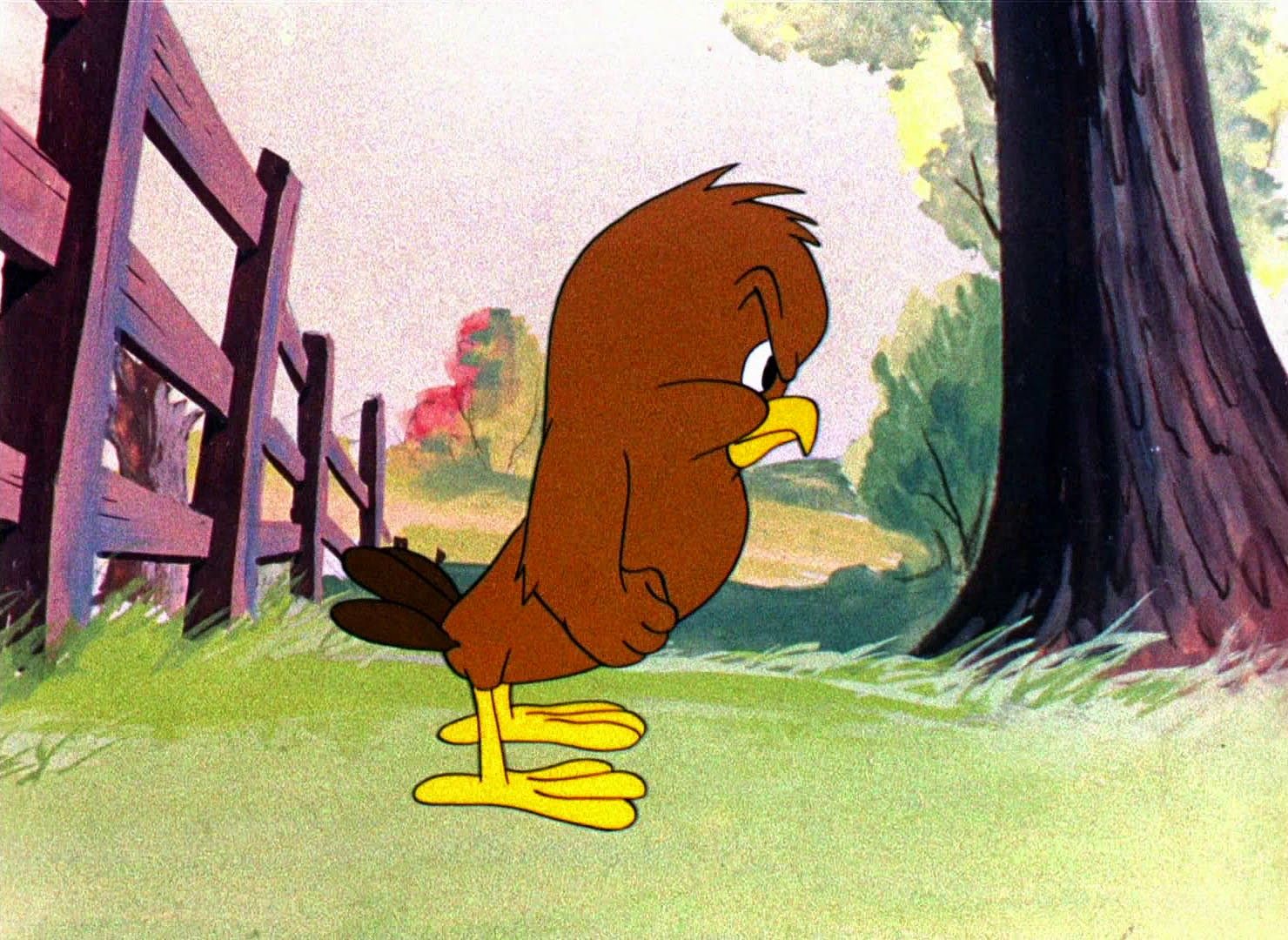 But I suppose that puts me in the minority opinion on this. After all, Walky Talky Hawky not only secured itself an Oscar nomination (losing the actual award to the Tom and Jerry short The Cat Concerto, proving that, occasionally, the Oscars get it one hundred percent right), but Foghorn Leghorn proved to be a breakout star, appearing in his own series of shorts. Personally I can't say I see the appeal. And I guess I don't really have to. Comedy is subjective after all, and if you like this short (or think you might enjoy it), more power to you. It's not brilliant, but it's not hurting anyone either. And considering some of the shorts we've looked at, I suppose that's better than nothing.