At the 15th Academy Awards, propaganda ruled. World War II was in full swing, and the Oscars reflected that. That year’s Best Picture winner, Mrs. Miniver was a heart wrenching tribute to the bravery of the British people during the Blitz. Literally every other category had at least one nominated film which dealt with the war in one way or another. Hell, the Academy Award for Best Documentary was basically created just to recognize all the propaganda shorts Hollywood was churning out. And nowhere was this phenomenon more clear than the category for Best Animated Short, with all but two of the nominees being propaganda shorts. The Oscar that year went to Der Fuehrer’s Face, which is probably the most popular World War II propaganda short ever released, whether Disney likes it or not. But that year also saw the release of Tex Avery’s Blitz Wolf, which might not be as well-loved, but certainly deserves a place at the table.

While Tex Avery is best known for his work at Warner Bros., the 1942 release of Blitz Wolf marked his first short for MGM. Despite this, the short contains all his usual staples- extreme cartoon violence, a complete disregard for anything resembling the rules of reality and more fourth wall breaks than you can shake a stick at. In addition to being a piece of World War II propaganda, Blitz Wolf is ALSO a parody of The Three Little Pigs (which seemed to be pretty popular that year), with the wise pig preparing his home for an invasion by Adolf Wolf, Colossal Stinker. The other two pigs think him a fool for this, citing the treaty they signed with Adolf as proof that no invasion is coming. You can imagine how well that goes for them. Blitz Wolf is not exactly subtle in its messaging, urging viewers to prepare, sacrifice and buy bonds to support the war effort. But subtlety really is besides the point in these types of shorts, isn't it? Besides, Blitz Wolf has something that most propaganda shorts never managed- it's incredibly funny. 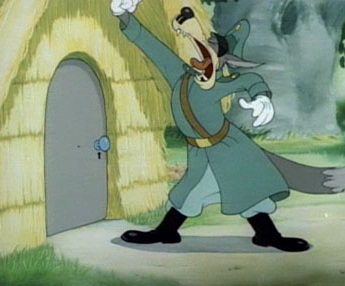 While a lot of the Tex Avery shorts we've covered in the past have not exactly shown the director at his best, the same can certainly not be said for Blitz Wolf. This short is packed to the brim with the kinds of gags which made him famous, and, remarkably, virtually all of them land. (Also remarkable- this short is only mildly racist, with only a couple of mean-spirited jabs at the Japanese sprinkled throughout. Not that any level of racism is acceptable, of course, but compared to Der Fuerher's Face it seems downright wholesome.) Tex Avery really pulled out all the stops for this one, throwing in every classic gag you can imagine, and plenty more you probably couldn't! If there's a type of joke you think of when you think of old cartoons, it's in here. The short even manages to end on a Jerry Colonna reference in a way that's funny even out of context. (Man, what was with cartoons and Jerry Colonna? They fucking loved that guy.) None of these gags are particularly unique, admittedly, but an old joke told well is still gonna make you laugh. And it certainly doesn't hurt that the move to MGM clearly didn't affect the quality of animation; if you didn't know better, it'd be very easy to mistake this for a classic Looney Tunes short. 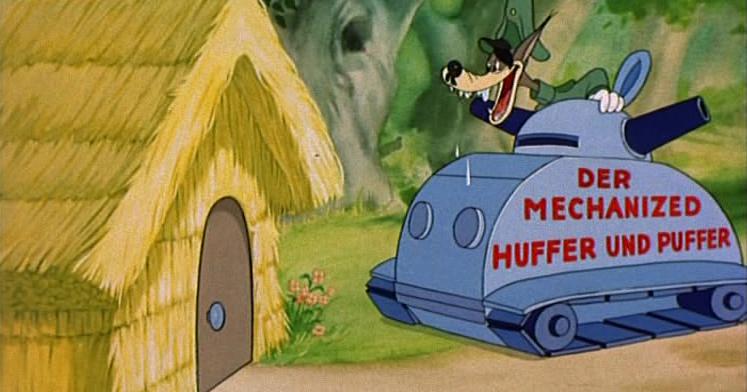 In the pantheon of World War II propaganda cartoons, I think I still have to give the crown to Der Fuerher's Face; that short was a little more original, just as funny as Blitz Wolf, and was a bit more successful as a propaganda piece. (In hindsight, Hitler's willingness to break treaties was probably one of the least evil things about him, so it's a little strange to see a short which mostly focuses on that.) Still, it's a close race between the two, and there's no shame in coming in second. I suppose it's a pretty low bar to clear, but those two shorts are so much better than most propaganda films we've covered it's almost an insult to compare them. (Reason and Emotion, another Disney short, is also better than average, but we'll get to that later this week.) Blitz Wolf may be propaganda, yes, but at the end of the day it's still a film. You can watch it out of context and still enjoy yourself, even if you might cringe on occasion. How many other propaganda shorts can say that? How many even tried? As with all things, there's a right way and a wrong way to make propaganda. And if you're going to make it, making it like Blitz Wolf is definitely the right way to go.