Way back in January, we covered a 1974 short entitled The Legend of John Henry. Now that short certainly has its fans, but I was not one of them. Just about every stylistic choice made in that film was one that I found incredibly aggravating, and I simply couldn’t get into it. Which is a shame, because I really do like American tall tales, and it shouldn’t be that hard to make a good movie about them. So the question of the day is- did George Pal manage to do that with his 1946 short John Henry and the Inky-Poo? Well, I don’t have high hopes for that, but you never know! 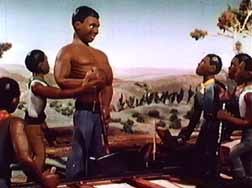 As you can guess from the title, John Henry and the Inky-Poo retells the story of John Henry, and as you can guess from the director, it's another one of George Pal's Puppetoons. I'm never really quite sure how I feel about these shorts. And, unfortunately, I'm not quite sure how I feel about this one. You see, every film in our Year in Shorts has been one that I've seen before, and this is no exception. But as you can imagine, I don't remember all 365 shorts in vivid detail, so I like to rewatch them before writing a post. But sadly, whatever site hosted the version of this film I'd seen before seems to have taken it down, and I can't find anything more than an excerpt. This is an issue that often comes up when I try to watch a Puppetoon, especially his ones based on Dr. Seuss books. (I will see The 5,000 Hats of Bartholomew Cubbins one day, damn it!) I know that I didn't like this short when I first saw it, but now that I have some more context I feel like I might appreciate it slightly more. Or perhaps I wouldn't. Who's to say? I certainly can't. A part of me feels guilty about how lackluster today's post is shaping up to be, but a larger part of me says Fuck it! I'm on vacation! And really, isn't the real culprit the ridiculousness of copyright law? This short was released seventy-five years ago, for God's sake. It should definitely be in the public domain by now! So if you're disappointed that you didn't get a proper review today, don't blame me- blame the corporations.

Regardless of who you blame for all this, here's what I do remember from the short. John Henry and the Inky-Poo takes some liberties with the original story, changing John Henry from a normal man to a supernatural giant. I can't say I understand the thinking behind that. The whole point of John Henry was that he was a normal man, wasn't it? Turning him into a giant kind of defeats the whole purpose of the story, doesn't it? He's not Paul Bunyan or Pecos Bill, you know? I also know that, like all of George Pal's Puppetoons, the animation is undeniably impressive and also incredibly creepy. I know that on a technical level it's amazing what George Pal could do with wooden puppets, but I also know that on a visual level it nevertheless often comes across as stiff and awkward. But, on a far more positive note, the short was also very well-received by Black audiences and critics at the time. Prior to this, George Pal had made a series of shorts featuring a character named Jasper, who embodied a great number of African-American stereotypes. (We'll get to one of those shorts eventually.) John Henry and the Inky-Poo, it seems, was made as an attempt to address those issues he'd had in his other shorts. Aside from being directly drawn from Black folklore, Pal insisted on an all-Black cast, which was rare for cartoons in those days. That certainly makes it an interesting and important short. But is it enough to make it a good one? I can't be sure until I get the chance to revisit it, but I'd have to say that it isn't for me. As much as I love me some stop motion, I must confess that the Puppetoons rarely do much for me, especially the ones featuring human characters. So in spite of all the good things it has going for it, I can't say that John Henry and the Inky-Poo would do much to make it any different. But of course, there's currently no way to know for sure.