A Year in Shorts Day 82: "The Legend of John Henry"

Ask any cinephile what the best decade for filmmaking was, and there’s a very good chance they’ll answer with the 1970s. And it’s not very hard to see why. The era of New Hollywood resulted in an unprecedented amount of creative freedom from studio projects, resulting in such classic films as The Godfather, Chinatown and Star Wars. But of course, just because great films were being released in those days doesn’t change the fact that they made a lot of crap, too. It’s just that the crap doesn’t get remembered. Case in point- the 1971 animated short, The Legend of John Henry. 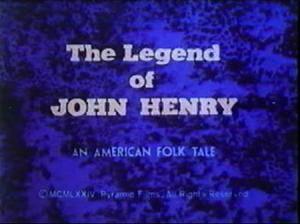 Directed by Sam Weiss, The Legend of John Henry is not the first animated short to be made about its titular folk hero; it's not even the first to be nominated for an Oscar! But it is definitely the most 70s, for better or for (mostly) worse. Set to an original song performed by Roberta Flack, The Legend of John Henry uses limited animation and a funky beat to tell one of America's most enduring tall tales. And quite frankly, I don't like it!

Of course it's easy enough to say you don't like something, but to explain why can be tricky. And with this short, it seems especially difficult. This short definitely has its fans, and if you're one of them, more power to you. But to be honest, I just dislike this short on a fundamental aesthetic level. I find the animation ugly and cheap, the color choices bizarre and unpleasant, and the song fairly annoying and atonal. No disrespect to Roberta Flack- who has accomplished more in her life than you and I ever will- but the song has no real shape to it and the production is often obnoxious.

That honestly sums up the entire short. And with an eleven minute runtime, this short long overstays its welcome. I give it credit for making some bold choices, even if I hate pretty much all of them. When it comes to animated shorts, the 1970s was a strange time, producing some absolute classics and some absolute stinkers. The Legend of John Henry definitely counts among the latter.