Rating movies is an arbitrary and ultimately meaningless task, subject to the whims, biases and personal tastes of the one doing the rating. Nevertheless, I do have some strict rules that I follow. Is Jim Broadbent in your movie? Well, I add half a star. Does something horrible happen to a character’s teeth? Well, I remove half a star. But the most surefire way to get a half star bonus is to make your movie in stop motion animation. Although films like The Great Cognito certainly test that rule to the limit. 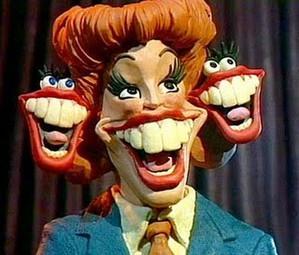 Regular readers of this blog may remember the name Will Vinton, director of such beloved (?) shorts as Closed Mondays and Creation, as well as the guy responsible for the California Raisins. Unlike those last two shorts, The Great Cognito (released in 1982) isn't quite so high concept. Instead, the film is basically a standup routine set up to animation, with the title character (voiced by John Morrison) showing off his skill as an impersonator doing a bit on World War II. His targets include Hitler, Patton, and even the Andrews Sisters! But since this is an animated short, Cognito's skill at impressions goes far beyond vocal, with his face improbably changing shape with every new bit. And hey, there's nothing wrong with a series of impersonations brought to life through animation; that's basically the Genie's whole bit in Aladdin after all. Still, it's not much of a premise to build an entire film on, and The Great Cognito more than wears out its welcome, even with its short four minute runtime.

Look, I'll give Will Vinton (along with his small team of animators) credit where it's due- the animation is undeniably impressive. The way Cognito's face morphs so fluidly between various caricatures is pretty amazing. Even if I find Vinton's style rather garish and off-putting (especially in a short like this, which takes place primarily in closeup), the technical skill it took to put it together is nevertheless worth your respect. Unfortunately, there's really not a lot more to the film than that, and what's there is pretty annoying. I suppose Morrison's impressions are pretty good, but his rapid fire delivery is just obnoxious. But honestly, the worst part of the short is that it's just not funny. It's that style of humor which thinks throwing out as many impersonations as you can in quick succession counts as a joke, which it objectively does not. The animation provides a little more in the way of humor (as well a small dose of racism towards the end), but none that elicit more than a mildly amused grin. And unfortunately for The Great Cognito, it is a truth universally acknowledged that bad comedies are the worst type of bad movies. A bad drama you can laugh at; a bad comedy, by definition, doesn't make you laugh at all. Best case scenario it just washes over you; worst case it actively annoys you. And while The Great Cognito isn't the WORST short we've looked at, it still falls on the latter end of the spectrum. The animation is neat, but that only gets you so far in my book.