Dave Fleischer (along with his brother Max) is responsible for producing some of the most beloved animated shorts from the 1920s to the 1940s. But like all great artists, he certainly had his fair share of duds too. And ranking particularly high on that list of flops is Bob Wickersham’s 1943 short, Imagination. 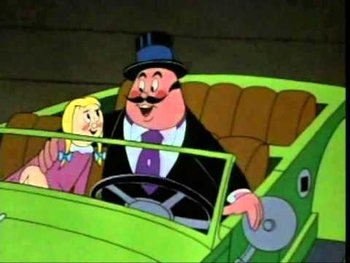 Imagination is another one of those shorts where there really isn't a heck of a whole lot to say about it. Oh it's bad, sure. But not in a particularly interesting way. Just in that sort of boring, generic, vaguely annoying way that's common to a lot of bad cartoons from the 30s and 40s. Still, I have a job to do, so let's get on with it. A part of Columbia's Color Rhapsody series (which may sound like a half-assed Silly Symphonies/Merrie Melodies ripoff, but I can assure you is much worse), it tells the story of a poor little girl who imagines a story explaining how her toys got so beat up. What proceeds is an adventure which combines romance, kidnapping, car chases and a bit of hospital drama. That's a cute enough concept for a short, but there's one important detail I forget to mention- this short is a musical. And the music in it is fucking terrible. It's part of that specific brand of terrible music that pops up in a lot of old cartoons, and the short is absolutely filled with it. A lot of it kind of reminds me of the recitative portions of the musical numbers in Marx Brothers movies, except those bits were at least funny, short and generally lead into actual songs. It runs through the whole short, and it's pretty repetitive. Other portions of the music are less obnoxious, but not any better, more reminiscent of the opening narrative numbers from Disney movies like Alice in Wonderland or Peter Pan, except terrible. The lyrics aren't any better, with a lot of forced rhymes and awkward attempts at humor. It runs through the whole short, and it's pretty repetitive. I should say that none of the singers are particularly bad (in fact, some are quite charismatic), but there's only so much they can do with this kind of music. Any charms this short might have are pretty much canceled out by the wall-to-wall obnoxious singing. It runs through the whole short, and it's pretty repetitive.

Not that this short has much in the way of charms aside from that. The animation is passable, but it's done in an overly cutesy style that I find completely aggravating. (Not helping that is the obviously grown woman playing the young girl at the beginning, which is something I always hate.) I guess this style of animation has its fans, but lord knows I am not one of them. A lot of this film's artistic sensibilities are like that for me, from the music to the animation and the sense of humor. There really isn't much more to say about it than that if I'm honest. Like I said, there's a version of this short that I would enjoy, but it would have to do just about everything completely differently. If this kind of short works for you, that's great. But on just about every level, Imagination is an affront to my aesthetic sensibilities and I look forward to never having to watch it again. Unless I ever get that Great Oscar Baiters podcast off the ground. But for now that's just something we'll have to imagine!