If I’ve said it once, I’ve said it again- reference humor is a tricky business. Most of the time, it's a short term gain but a long term loss. Occasionally you’ll get lucky and wind up with something amusing in its own right, but let’s be real- most of the time these films just suck. But what if the reference you build your film around is truly timeless, a legendary actor from classic Hollywood? Well luckily the 1994 short film The Big Story is here to answer that question for us. Turns out it would still suck! 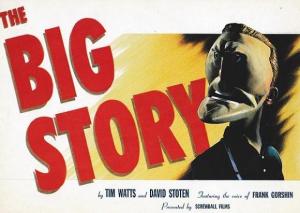 At a whopping two minutes long, David Stoten and Tim Watts' The Big Story is another short which will take longer to read about than it will to watch. Although even then, that might be pushing it, because there's really not a lot to say about it. The thing is just one extended reference, with three stop motion versions of Kirk Douglas (representing three different phases of his career) arguing in a newspaper office about the titular big story. It's not much of a premise for a film, although I guess if you're really into old movies you might get a kick out of it. Hell, Quentin Tarantino was such a big fan he asked for it to be played in front of screenings of Pulp Fiction. And while I do have a great love for classic Hollywood cinema, I do admit the filmography of Kirk Douglas is something of a blind spot for me. (Hey, I saw Ace in the Hole this year at least, which this short certainly wants you to think of.) With more context I might enjoy this film more, although I kind of doubt it. I understood all the references in Ready Player One, after all, and that didn't do much for me.

I don't want you to walk away thinking The Big Story is entirely without merit. The black-and-white cinematography is nice, Frank Gorshin (best known for playing The Riddler on the Adam West Batman series) gives a splendid vocal performance, and the final gag is pretty solid. Plus, it's all stop motion, so I have to give it credit for that. But I don't know, it really just doesn't do anything for me. It's a one joke premise, and that joke just isn't very funny to me. At only two minutes, I can't exactly say that it's a waste of time. But even so, I think both your and my time would be better spent watching an actual Kirk Douglas movie.