Regular readers of this blog know by now that I have a few animated archnemeses. Whether it’s unfunny sex pest Pepe Le Pew, the eternally forgettable Andy Panda or that yellow bastard Tweety, I have no shortage of cartoon characters I’ll take any and all opportunities to mercilessly dunk on. But there are few figures in the medium I find so uniquely unsettling as Mickey’s dog Pluto. That's something of a problem with today's short, The Pointer, which features Pluto pretty heavily. But luckily for us, there's quite a bit more to discuss today than the antics of Mickey Mouse's canine companion. So let's get into it! 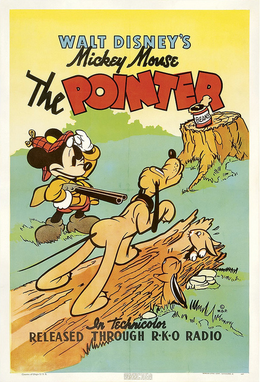 In many ways, The Pointer seems to be a typical cartoon from the era. Mickey and Pluto are going into the woods to hunt and wind up running into a rather angry bear. Sort of like a Bugs and Elmer short with Elmer as the lead. (Granted, this short was released in 1939, and the best Bugs/Elmer shorts were released in the 50s, so I guess this is more of a proto-example. Speaking of which, I recently watched some of those shorts and it's ridiculous they didn't get nominated for an Oscar. But I digress.) There is a bit more complications with Mickey training Pluto to be a pointer (hence the title), but it's pretty straightforward. As is always the case with shorts with simple setups, execution always comes down to the humor and the characters. Of course, Mickey Mouse shorts aren't really known for their jokes (at least not by this point), and Pluto is clearly not a character I particularly enjoy watching, so there's some trouble there. There may be some amusing bits here and there (particularly the scene in which Mickey pleads for his life and does a rather poor job of it), but the content of the short really isn't anything special. 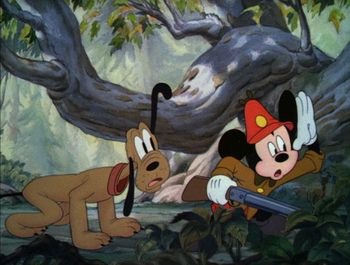 So what sets The Pointer apart from the rest of the pack? Well, there's a couple of things. For one, the background animation is simply gorgeous, probably better than you'll see in just about any other Mickey Mouse short. One almost wonders if director Clyde Geronimi (who would go on to direct some classic features such as Alice in Wonderland and Sleeping Beauty) didn't scrounge the studio archives for some unused backgrounds from Snow White. But more importantly, this short is one of the first to feature Mickey's new design, which has more or less stuck around since. It is not, as is often erroneously believed, the first short with the new look, but it's probably the short that made it stick. If only they could have done something to fix Pluto.

If I'm being honest, I much prefer Mickey's old look, but I can certainly understand why it had to change. The more simplistic and cartoony design simply didn't jive with the studio's new direction towards more realistic and less cartoony animation. But since we're on the subject, allow me a brief tangent on Mickey's evolution as a character overall. You see, back in the early days Mickey was more of a mischievous scamp with a nice side than the goody two-shoes we all known him as today. Unfortunately as Mickey's popularity skyrocketed, Concerned Parents grew worried that he would serve as a poor role model for their children. I would argue that letting cartoons serve as role models for your children is a sign of poor parenting more than anything, but that's besides the point I guess. Over the years, Mickey became a softer and nicer character, which in turn made him considerably less popular, so then kids started looking up to Donald Duck and Goofy instead. (Nice going, parents!) That transition clearly wasn't complete by the time of this short, however. While Mickey isn't really the puckish figure he was before, he's not exactly squeaky clean here either. In fact, at times he's downright mean, especially to his poor ugly dog. Berating Pluto is my job, Mickey, not yours! His characterization in this is something of a mixed bag, if I'm honest. Sure, it's nice that he's not too pure of heart to try and use his fame to avoid getting eaten by a bear, but that's not the Mickey Mouse we knew and loved! Although now that I think of it, maybe this new look for Mickey is actually a sign that this is the "real" Mickey Mouse, and the one from all the previous shorts was just a character he played. Does that mean these later shorts are more like a Keeping Up With the Kardashians situation? No wonder they aren't as good.

What does any of this have to do with The Pointer? Almost nothing, but I thought it was interesting. Or at least more interesting than the short. If you can't tell from this rambling, unfocused blog post, I don't really have much to say about The Pointer. And to be perfectly honest, there really isn't that much anyone can say about it. It may be somewhat noteworthy in terms of Disney history, but overall it's a pretty unremarkable effort from a studio which was known for pushing the boundaries. But really, how many times has Mickey pushed boundaries since Steamboat Willie? Mickey and Pluto were certainly popular with audiences, but I think by this point they were just coasting by on name recognition. It's certainly no surprise that they lost to The Ugly Duckling anyway. THAT short had cute birds. This short just had a more boring Mickey and a whole lot of Pluto. And let me tell you, that is not a trade worth making.