A Year in Shorts Day 255: "The Longest Daycare"

Fellow Oscar Baiters, I have a confession to make- I’m not a huge fan of The Simpsons. Not that I have anything against the show mind you. Far from it; judging by the numerous quotes the Internet has turned into memes, repeated ad infinitem, I actually find it quite enjoyable. It’s just that… well, I’ve never really watched a whole lot of it. Barely any, in fact. So when I say that I’m probably not the target demographic for The Longest Daycare, you probably have a good idea what I mean by that. But let's give it a whirl anyway. 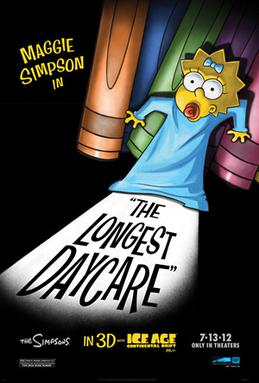 Released in theaters in 2012 alongside showings of Ice Age: Continental Drift (which, by all accounts, this short received much better reviews than) and directed by Simpsons vet David Silverman, The Longest Daycare follows Maggie Simpson on an eventful day at the Ayn Rand School for Tots, which I assume is a concept which the show got a lot of comic mileage out of, rather than the fairly lame gags on display here. Still, the short has a few good things going for it. The music by Hans Zimmer (of all people) and James Dooley is a particular highlight; it's catchy and sentimental in some places, while in others it's nicely frenetic. It kind of reminds me of Zimmer's score for Driving Miss Daisy, except played on actual instruments and not terrible. I also have to give the film credit for telling its story completely free of dialogue. That's pretty tricky to do, especially in just four minutes. And it's an undeniably cute story, so if that's your bag, then you'll probably like this one.

Still, I have to admit that I mostly find The Longest Daycare to be pretty unremarkable. The animation, while technically impressive, looks a little too polished for my liking. I know that's a strange complaint, but there's something unpleasantly soulless about the way it looks and it just rubs me the wrong way. (I wonder if this is an issue people have with modern era Simpsons in general; I wouldn't be surprised.) Apparently the short was originally released in 3D, and I wonder if that might be a part of why it just looks off watching at home. I'm certain that the film played better in theaters, although I can't imagine if it'd change my opinion of it all that much.

The short isn't particularly funny either. There are a couple of jokes worthy of a smirk or a light guffaw, but that's about it. Even as a Simpsons novice, I know that the show has produced far better jokes than this. But of course, that was in the glory days, and maybe longtime fans give this short the benefit of lowered expectations. Who can say? All I know is that the humor didn't really work for me, despite the fact that its dark and cynical tone is something that'd usually be right up my alley. And, worst of all, I just hate cartoon babies. And unfortunately, this short is packed to the brim with them. One cartoon baby is bad enough. A whole short's full of them? I have to pass. But if you're more of a Simpsons fan than I am, or you just want to watch a cute short about babies, I suppose you could do worse than this. Or at least I assume so. I'm clearly not an expert on these things.

"The Longest Daycare" is available to watch on Disney +