Voyeurism is a subject that has long fascinated filmmakers, and I guess it’s not very hard to see why. In many ways, the mere act of watching a film is, in its own way, voyeuristic. Still, there are a lot of different ways to tackle the subject, and I feel like few films are as in favor of it as today’s short, the 2019 Oscar winner, The Neighbors’ Window. 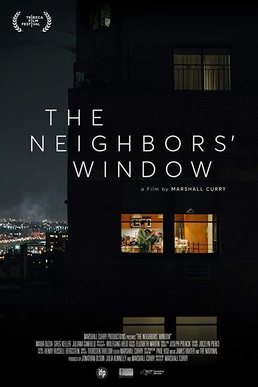 Written and directed by Marshall Curry, a man primarily known for his documentary work, The Neighbors' Window tells the story of a bored married couple who discover they can see into the apartment of the much younger couple living in the apartment across the street. This is somewhat stretching the definition of the word "neighbor" if you ask me, but I digress. The film takes place over a series of months, chronicling changes in the relationships of both couples, and all the fights and drama that would naturally arise over spying on people. It's ultimately your basic domestic drama, but with a twist.

As is always the case with these types of stories (and really all stories), it all comes down to execution. And the execution here is pretty damn good. Curry proves that he considerable skill behind the camera, and I'd certainly be interested in seeing him tackle a narrative feature. (The Neighbors' Window is apparently based on a true story, which might explain why he made the jump.) While Curry doesn't exactly reinvent the wheel here, he's still produced a damn good-looking short. Wolfgang Held's cinematography successfully captures a muted color palette without looking drab, and the exterior shots are particularly lovely. And special mention must go to the score, written by James Baxter and The National. It's nice and emotive without ever going overboard on the sentimentality, which is just about perfect for this short's tone.

But what really elevates this short is the acting. Succession fans might recognize Juliana Canfield as one of the neighbors, who does quite a lot with the little she's given. Similarly effective is Greg Keller in the role of Jacob, making for a very convincing schlub of a husband. But the real MVP here is Maria Dizzia as Alli, who really carries most of the film on her back with her nuanced and understated performance. Perhaps this is not that surprising; Maria Dizzia belongs to the same category of actors as Rosemarie DeWitt, where you always forgot how great they are until you see them allowed to give a great performance. I'm not sure if they give out awards for acting in short films, but if they do, Dizzia should have won a few for this. 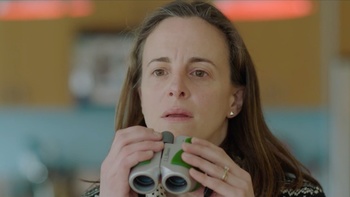 The Neighbors' Window is not a great short; its twenty minute runtime often feels padded, and I'm not sure some of the more melodramatic moments in the story are entirely earned. The ending, especially, feels somewhat forced. But maybe that's how the story went in real life, who can say? You expect me to listen to a podcast just to find out? Regardless, The Neighbors' Window is an engaging and mostly lowkey drama, the kind of film we don't see much of these days. That alone is worth celebrating, and maybe, just maybe, worth an Oscar as well.