Typically when we think of documentaries, we picture films in which the director went out and shot footage themselves. Whether they use reenactments, conduct interviews or capture the footage live as it happens, the popular image of a documentary is one that the filmmakers have an active hand in filming. But some documentaries are made entirely of pre-existing footage, edited together. These archival documentaries are typically features, often tied together with some narration. But today’s short, Marshall Curry’s A Night at the Garden, doesn’t do that. But some films speak for themselves. And in 2017, this film more or less spoke for itself. 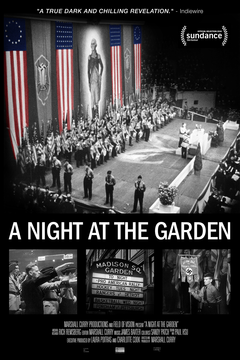 Marshall Curry may not be a household name, but he's certainly made a name for himself at the Oscars. Starting with his 2005 documentary Street Fight, Curry has racked himself up a few nominations across his career, finally winning last year for his fictional short The Neighbour's Window. A Night at the Garden fits in line with his earlier political documentaries, recounting the story of a "pro-American" (read: Nazi) rally held in Madison Square Garden in 1939. Apparently the footage was originally shot for newsreels, but was shelved in fear of being too controversial. After the footage was discovered by producer Rich Remsmberg, Curry edited it together to make a seven minute film which you can watch for free here.

When we discussed A City Decides a few days ago, I discussed how it felt more like a newsreel than a documentary. So you might be forgiven for thinking that I wouldn't much care for a documentary made from a newsreels. But you would be wrong! There is a great deal of artistry and skill in the act of editing old footage together, and Curry pulls it off pretty well. Combined with an eerie original score by James Baxter, A Night at the Garden is a fairly haunting piece of documentary cinema. And Curry manages to draw some pretty undeniable parallels to contemporary politics without having to spell it out.

If I had a complaint about A Night at the Garden, it would be one that might not entirely be Curry's fault- it's far too short. At only seven minutes long, it feels like there really should be more to the film. It's possible that Curry had no choice in the matter; for all I know, this was all the usable footage he had on hand. Either way, it feels like there's just something missing, and it's no surprise A Night at the Garden lost to Period. End of Sentence, which feels more complete. A part of me wonders if perhaps the decision to only use archival footage maybe hampered the film a bit; perhaps some juxtaposition (such as seen in Ava DuVernay's 13th) might have been a little obvious, but certainly powerful.

I suppose that's a minor complaint in the grand scheme of things, and shouldn't dissuade you from checking it out. As a piece of archival documentary, it's pretty average; it doesn't compare to the masterful work Peter Jackson did with They Shall Not Grow Old, but what could? And as a piece of history, it's both fascinating and extremely chilling.