The legacy of the Pink Panther is certainly a strange one. While the films themselves are remembered very fondly (just ask my dad), I don’t think it’s wrong to say that the animated mascot probably holds a bigger place in most people’s hearts these days. Either that or the iconic theme music. And I suppose that’s hardly a surprise; he was a breakout star, appearing in his own series of successful animated shorts. Today’s film, The Pink Blueprint, certainly makes a good argument as to why that is.

The premise for The Pink Blueprint (directed by Hawley Pratt and released in 1966) is a pretty simple riff on the tried-and-true formula. (The Pink Blueprint is the eighteenth in the series.) In this short, the unnamed Little Man is trying to build a house, but the pesky panther keeps getting in the way. Considering that the last time we saw these two, the Little Man was painting a house, I suppose we ought to be happy with his recent promotion to contractor. The Pink Blueprint is more or less what you'd expect from a Pink Panther short, and that's hardly a bad thing, is it? (Also, apologies for the laugh track; I tried to find a decent version without one, but this is from the official Pink Panther YouTube channel!)

In a lot of modern film criticism, the term "formulaic" is often used as a pejorative. And sure, it makes sense; we want films to show us something new and original. But a formula becomes a formula for a reason, and some of the best films in cinema history are just riffs on a tried-and-true recipe. And while The Pink Blueprint might not be an all time classic, it nevertheless demonstrates why "formula" doesn't have to be a dirty word. The setup may be familiar, but the gags are all new, and frequently clever. In many ways, this is peak cartoon absurdity, with a lot of gags that wouldn't feel out of place in a classic Looney Tunes short, just with its own unique flair. It's that flair that really sets the Pink Panther shorts apart, I think. They have their own style of animation, similar to the minimalist style of a UPA short, only perhaps even more so. And they have their own rhythm too, perhaps helped along by the use of the same musical theme. As with a lot of shorts, it's not just the content, but the execution. 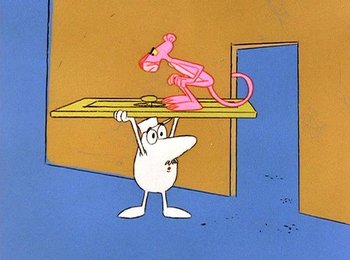 As to whether this or The Pink Phink is the superior film, it's hard to say. I think I'll go with the earlier short, if only by virtue of coming first. Or maybe it's just the fact that the version of it I saw didn't have a laugh track. Either way, both shorts are well worth a watch, especially for fans of good old-fashioned cartoon shenanigans. Unfortunately, The Pink Blueprint didn't follow its predecessor's path to success, losing the Oscar to A Herb Alpert & the Tijuana Brass Band Double Feature. And while I guess that film is certainly more important, I definitely wouldn't say it's better. But that's how it is with the Oscars sometimes. Even the best riff on a formula is still part of that formula. Sometimes it pays to break new ground, especially in the 60s!