We have a lot of fun here at The Great Oscar Baiter (I assume; if you’re not having fun, I sincerely apologize), but today I want to discuss something serious. And that is how American society clearly hates its pedestrians. Oh sure there are some parts of the country with decent public transportation, but for the most part, we are a society that prioritizes drivers over everyone else. And there’s no better example of this than the “crime” of jaywalking, an offense concocted by the auto industry to place the blame of traffic incidents on those most affected. Why do I bring this up? Only to say that I consider Milton Muffet, the protagonist of Robert Cannon’s The Jaywalker, to be a true American hero. 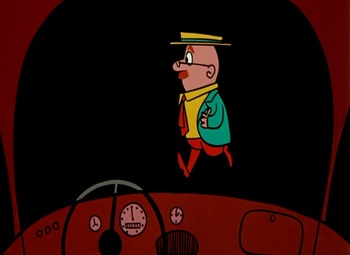 Released in 1956, The Jaywalker is another short from UPA, and you can tell by looking at it. Every frame of this film serves as an excellent example of UPA's trademark style, from the exaggerated character designs to the striking use of colors, made especially vibrant with the use of black backgrounds. (I have no idea whether or not the film was drawn on black paper instead of white, but it certainly seems like it). With UPA shorts, the animation is usually the most noteworthy thing about it. Unfortunately the animation is just about the only noteworthy thing about The Jaywalker. Which is a shame, because as far as premises go, "A man becomes addicted to jaywalking" is a perfectly decent one. And yet the short just doesn't come together into anything special.

I think it might be the voice acting. The Jaywalker is Eugene Bollay's only acting credit, which isn't too surprising given his stilted, monotone delivery. But even the best voice actor couldn't do much with the script, which never seems to want to go anywhere with its premise. A lot of comedic potential is left lying around, and the short seems infuriatingly committed to not getting too crazy. Compare the hijinks in this short to the shenanigans going on in Magoo's Puddle Jumper, and you can't help feel a little let down.

And that's an appropriate comparison in more ways than one! Not only are both shorts UPA releases, they were also both nominated for Best Animated Short in the same year. Magoo's Puddle Jumper won that year, beating out The Jaywalker and the only other nominee, Gerald McBoing-Boing on Planet Moo... ALSO a UPA release (and also, for the record, the worst short of the three by far). Yes that year UPA producer Stephen Bosustow received all the nominations in that category, a feat Walt Disney couldn't even pull off. And while Magoo's Puddle Jumper is the only truly good short of the bunch, I can't fault the Academy too much for their decision. Even the worst of the UPA shorts have a unique style which makes them worth a watch, and The Jaywalker is no exception. Just ignore the story and enjoy the show.