Mr. Magoo may not be the most beloved character in animation history, but he still holds a respectable place in it. Everyone’s favorite half-blind retiree was the star of a few Oscar-nominated shorts, and managed to win a few. And with shorts like Magoo’s Puddle Jumper, it’s not hard to see why. 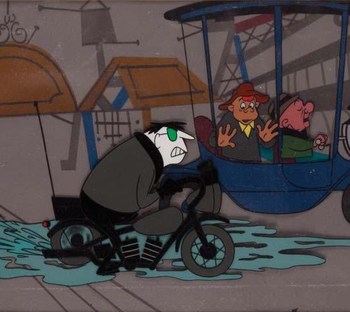 Magoo's Puddle Jumper, released in 1956 and directed by Pete Burness, follows the basic Magoo formula- Mr. Magoo finds himself in a situation (in this case, buying a new car) which he manages to make worse thanks to his nearsightedness and curmudgeonly nature. This time, he's brought along his nephew Waldo along for the ride.

As an aside, why are so many cartoon characters uncles? Donald Duck, Mickey Mouse, Scooby-Doo, Mr. Magoo... Where are these children's fathers? And why is it important that Mr. Magoo specifically not be a parent? He's already old, it's not like it'll age him. Sylvester has Sylvester Jr., why is there no Magoo Junior? Magoonior? And why does Goofy have a kid? He's clearly less qualified to be a parent than Donald or Mickey (well, maybe just Mickey), but Max isn't his nephew! Is it because he doesn't have a girlfriend? Mr. Magoo doesn't have a girlfriend, why can't he have kids? Is it because they don't want us to think that Mr. Magoo fucks? Because I refuse to believe that Mr. Magoo doesn't fuck.

Look me in the eye and tell me this man isn't a freak.
(via Giphy)

Umm... I went on a tangent there. Anyway, Magoo's Puddle Jumper is a standard Magoo short, so you should know what you're in for. The jokes are all pretty solid, and Jim Backus's vocal performance really sells it. But what really elevates this short is the animation. We first got a look at UPA's limited style when we covered Gerald McBoing-Boing, and it's used to masterful effect here. Between the expressive character animation and some truly impressive underwater imagery, this short is just lovely to look at. Even if you're not a fan of Mr. Magoo in general, Magoo's Puddle Jumper is worth checking out for that alone.