A Year in Shorts Day 91: "My Grandmother Ironed the King's Shirts"

In the annals of Oscar History, the 72nd Academy Awards will not go down as one of the Academy’s finest hours. American Beauty’s Best Picture win will only age worse with time, while the snub of more interesting (or at least far more influential) films such as Being John Malkovich, The Matrix and Fight Club will leave future viewers scratching their heads in confusion. Add to that other films largely ignored in the major categories, such as Julie Taymor’s Titus, Mike Leigh’s Topsy-Turvy or Pixar’s superb sequel Toy Story, not to mention completely snubbed classics like The Iron Giant and my beloved Galaxy Quest, and you’ve got an Academy Awards ceremony that’s a mixed bag at best. But there is one category, at least, which stands out above the rest. That year’s slate for Best Animated Short, with one major exception, very well might be the best group of nominees in the history of the category. And Torill Kove’s My Grandmother Ironed the King’s Shirts is definitely not that exception. 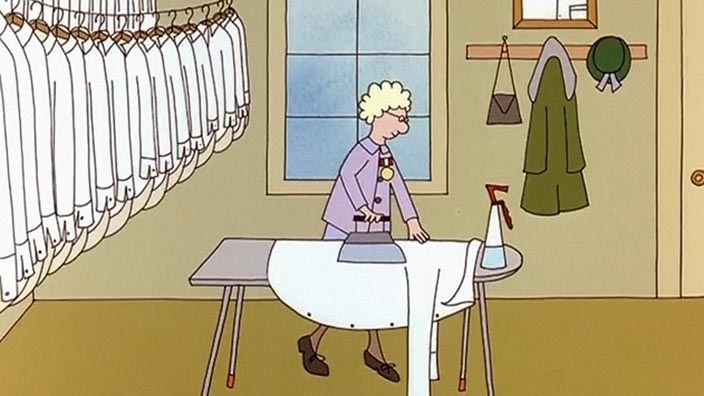 And Torill Kove’s My Grandmother Ironed the King’s Shirts is definitely not that exception.

Another production from our friends at the NFBC, My Grandmother Ironed the King's Shirts is loosely based on the story of Kove's actual grandmother and the time she spent ironing the shirts of Norway's newly crowned king. Things take a turn, however, when World War II begins and the Nazis take over Norway. Isn't that always the way. What follows is a quirky and delightful short, filled with a lowkey sense of humor and a great deal of history as well.

Of all the films we've covered thus far in our Year of Shorts, I don't think any of them are as simply charming as My Grandmother Ironed the King's Shirts. Everything about this short just works. The narration (written by Torill Kove and narrated by Mag Ruffman), is consistently funny and engaging, delivering every piece of information and subtle gag with a sardonic and underplayed edge perfect for both kids and adults. The animation is very simple but pleasant to look at, and the music by Kevin Dean (Kove's husband) is nice to listen to without ever being distracting. All of these elements come together to tell a story that is humorous and compelling, complete with a few comic tangents that add rather than detract from the story. Altogether, watching My Grandmother Ironed the King's Shirts is like watching a great children's book come to life, and I mean that in the best possible way. It's no wonder that the NFBC decided to adapt the short into a picture book nearly twenty years later. 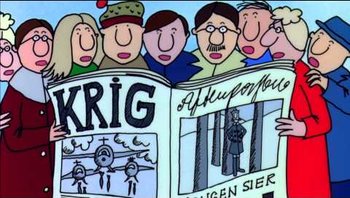 While My Grandmother Ironed the King's Shirts is definitely made with children in mind, it contains more than enough wit to appeal to viewers of all ages. It may not be as sophisticated as some of the more artistic shorts we've covered, but sometimes it's the simple films that sneak past your defenses and make you fall in love with them. Despite not having grown up with this short, it somehow makes me feel nostalgic all the same, and I can't imagine I'm alone in that one. Like the best children's films, My Grandmother Ironed the King's Shirts makes you feel young again just by watching it. And while it didn't win the Oscar that year, that has more to do with the strength of its competition than any failings on its part. It is simply wonderful, and I can not recommend it enough.