Christmas is a time for giving. A time for charity. A time for reaching out to someone in need with a hand of friendship to bring them in for the cold. And if you believe all that, today’s short has a bridge to sell you. Let’s take a look at Mickey’s Orphans, a Christmas short which tells us the dangers of too much goodwill towards men!

Released in 1931, Mickey's Orphans was one of the very first films to be nominated for the newly created Academy Award for Best Animated Short. It follows the story of Mickey and Minnie, who bring in a basketful of orphaned kittens from the snow and learn to regret it! Merry Christmas! 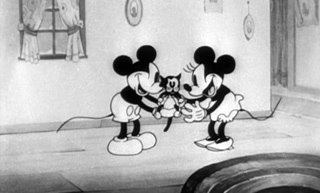 What I find most disappointing about this short is how conventional it is. Mickey's Orphans takes a simple premise and sees it to its logical conclusion, without any unexpected twists or turns. I'm by no means a Mickey Mouse expert, but I can't help but feel like the Mickey shorts from the 30s were more interesting than this. Compare Mickey's Orphans to Thru the Mirror which was only released five years later and bafflingly ignored by the Oscars. That short is filled to the brim with the madcap energy and anything goes style humor one anticipates from this era of animation. 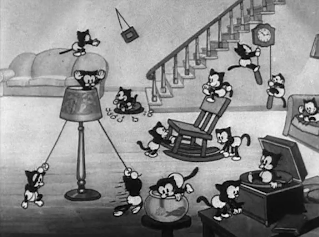 In contrast, Mickey's Orphans seems tame and predictable. I also find some of the story beats confusing, and when you start complaining about story in a short like this, you know you're in trouble. Still, the point remains- why, exactly, did Mickey Mouse think giving saws and cork guns to a gaggle of rambunctious children would solve his problems? I understand that it needed to happen for humor's sake, but it's still a head scratcher.

If I sound overly negative, I don't mean to. Mickey's Orphans is a perfectly entertaining short, and there's a lot to say in its favor. The jokes are consistently amusing, the animation is good and the cats are pretty adorable. It's fine, but it's always a little disappointing when Disney releases something that's just "fine", isn't it?

Mickey's Orphans wouldn't win the Oscar that year, but Walt Disney didn't go home empty-handed. He won the inaugural Academy Award for Best Animated Short for the film Flowers and Trees, a much more interesting short and a much worthier choice. I imagine Walt Disney would have thought so too.