Of all the types of documentary in the world, nature documentaries are undeniably the most popular. And why wouldn’t they be? Nature documentaries give us a glimpse into a world we otherwise never get to see, and are often exciting and beautiful in addition to being educational. Today’s short, Sword Fishing, is technically a nature documentary, although it belongs to a rare subgenre- the nature snuff film.

Sword Fishing was the first of the "Bow and Arrow Adventures", a series of short films made to showcase the talents of renowned archer Howard Hill. Fellow Oscar Baiters out there might be most familiar with Hill's work on the 1938 Best Picture nominee The Adventures of Robin Hood, in which he performed the iconic "splitting the arrow" shot. 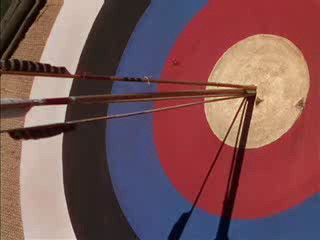 I couldn't find any GIFs of this scene, but trust me, it's impressive!

Released in 1939, Sword Fishing follows Hill as he attempts to become the first person in history to kill a bluefin marlin with a bow and arrow. It's grisly stuff, but I won't deny that it's interesting all the same. Plus, you have to admit that bow hunting is kind of cool. Say what you will, at least it gives the animals more of a sporting chance, especially in those days before bows and arrows got all fancy. I don't support big game hunting like elephants or lions (which, sadly, Hill definitely participated in), but marlin are a bit of a different story, I guess.

Another point of interest is that Sword Fishing is narrated by future U.S. President Ronald Reagan. This is actually the only one of Reagan's films that I've seen, and I have to admit that his narration really does add something to the film. Although the bit where he criticizes a suckerfish for taking a free ride from the marlin does serve as a troubling hint of things to come. 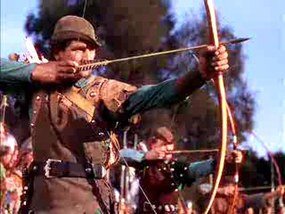 "Sheriff of Nottingham! You have failed this city!"
(via Wikipedia)

Altogether, Sword Fishing is a pretty entertaining short that serves as a good showcase for a phenomenally talented man. If you're squeamish about seeing animals get killed, you're not going to want to watch it, but for the rest of you I definitely think it's worth your time.