There are a lot of movies which were nearly made that I desperately wish I could bring into existence. One such film is Fantasia 2006, the canceled third installment in Disney’s Fantasia series. And while unfortunately that movie was never made, there were a handful of segments developed for that project and released separately. Today’s short, Lorenzo, is one of them, and if it’s any indication of what the rest of Fantasia 2006 might have been like, we missed out on something really wonderful. 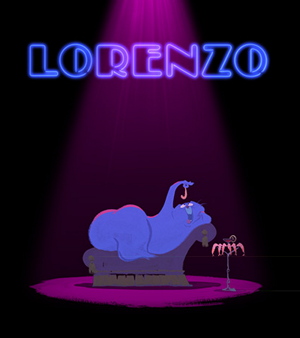 Directed by Mike Gabriel and produced by Baker Bloodworth (whom I mostly bring up because how can I not bring up someone with the name Baker Bloodworth???), Lorenzo tells the story of a vain cat who makes the fatal mistake of taunting some sort of tailless cat wizard. Said cat wizard then places a hex on Lorenzo's own luxurious tail, bringing it to life, and well... chaos ensues. 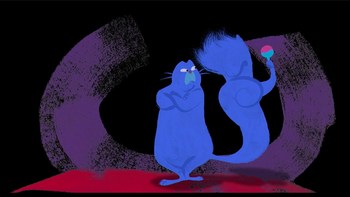 There is a lot to love about Lorenzo. The choice of music is great, with the short working perfectly in tandem with Juan Jose Mosalini's "Bordoneo y 9000". Its story is simple, but effective; it's interesting to note that the short's co-writer, Joe Grant, first came up with the short in 1949, finally seeing it come together in 2004, just a year before he died. And running throughout the whole thing is a deliciously wicked sense of humor, which is surprisingly dark for a Disney project, especially in those days.

But what really makes Lorenzo great is the animation. The backgrounds of the short were all painted on black construction paper, which gives the whole thing a very moody atmosphere. Still, the film manages to be extremely colorful while also being dark, and the character animation is vivid and memorable. Simply put, Lorenzo is a gorgeous (and even slightly spooky) short, and is an utter delight from start to finish.

Sadly, Lorenzo did not win the Oscar that year, losing instead to Chris Landreth's Ryan, a look at the complicated life of Canadian animator Ryan Larkin. And while Ryan is certainly a very good short, I think Lorenzo had it beat that year. Still, both shorts are well worth checking out. And if you haven't seen Lorenzo yet, you're definitely missing something very special.