I’ll put myself on a consistent schedule for these things one day, I promise. In my defense, there are a lot of movies to catch up on, and isn’t that what Oscar Baiting is all about? For instance- until recently, I’d never seen the original Top Gun! But with Top Gun: Maverick holding its spot as the biggest hit of the year (probably only to be dethroned by Black Panther or Avatar) and even potentially soaring into the obligatory crowd pleaser Best Picture slot, I figured it was time to see where things began. Because while the Oscars Top Gun: Maverick may win have yet to be decided, the first Top Gun only went home with one- for the love theme, “Take My Breath Away.” 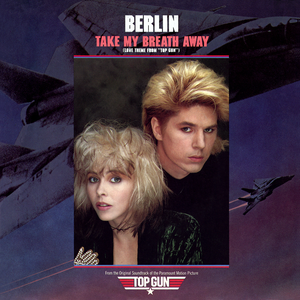 Love themes for films have gone a bit out of style these days, although for a long time it seemed to be a surefire way to nab a Best Song nomination. Seriously, look through the Wikipedia article and count how many times you see "Title Seemingly Chosen at Random (Love Theme from Movie You Didn't Expect to Have a Love Theme)." Honestly, Top Gun is hardly one of the strangest films to have a love theme. There is a love story sandwiched in there (and don't try and tell me the film's real love story is between Maverick and Goose or Iceman; the homoerotic content in this film has been vastly overexaggerated), and if you have a love story, you might as well have a song. Even with all that said, "Take My Breath Away" is kind of a weird fit for Top Gun. After all, Top Gun is a very MANLY film, about MANLY things like fighter jets, rescue missions, dick-measuring contests, tighty-whities, beach volleyball, a capella performances and Meg Ryan! And at the center of the film is a new wave song featuring heavy synth, gentle vocals and sappy lyrics? That's not the Top Gun I signed up for!

With music by Giorgio Moroder (the Father of Disco) and lyrics by Tom Whitlock (the father of at least one child), "Take My Breath Away" is one of several songs the pair composed for the film. According to this helpful interview I found, the duo were hoping to secure a nomination for Best Original Song Score, but missed out on a technicality. Perhaps such technicalities are why the Best Original Song Score doesn't exist anymore. In any case, "Take My Breath Away" arose out of something like a necessity; the film had recently added some extra love scenes between Tom Cruise and Kelly McGillis- allegedly out of concern for the film not being heterosexual enough; people were starved for gay content in the 80's- and like any good love scene, it needed a song. Add the band Berlin into the mix and voila!- you got yourself a hit, kids.

One thing you have to admire about "Take My Breath Away" is its audacity. In an age when most films these days just play their original song once to secure their eligibility and be done with it, Top Gun uses "Take My Breath Away" a lot. And I mean a lot a lot. Arguably too much! In addition to being a motif throughout the film, it is also, essentially, the only music playing for an entire stretch of the film dedicated to the love story. For maybe ten minutes, the song starts and stops and restarts at least four times, eventually climaxing in the film's sex scene. American audiences probably hadn't seen a soundtrack this repetitive since The Graduate, although at least "Take My Breath Away" is a bit more pleasant to listen to than "Scarborough Fair."

Which isn't to say that "Take My Breath Away" is a song I particularly enjoy listening to, mind you. It's by no means a bad song, but it's certainly not my kind of music. I really don't care for the synthesizer in general, and I think it's a particularly bad fit for what's supposed to be a passionate love song. Granted, the love story in Top Gun isn't particularly passionate either, so I guess it fits. It's got a nice beat and a decent tune, all of which would sound much better with a proper instrument. Whitlock's lyrics are nicely poetic, although I can't say they particularly mean anything to me, and I can't say they mean much in the context of the film either. That leaves a lot of the heavy lifting to Teri Nunn's vocals, and luckily she proves to be up to the task. It's not like she makes the song any less sappy, but by God does she sell the hell out of the sappiness.

And really, if I can give "Take My Breath Away" credit for anything, it would be its sincerity. The song doesn't have a cynical bone in its body, and even if very few of its elements really work for me, it at least goes for broke. It's 80s cheese, sure, but it's prime 80s cheese. And really, doesn't that just sum up Top Gun as a whole? I wouldn't call it a great film- and there are plenty of aspects I would go so far as to call pretty bad- but it wears its heart on its sleeve and it goes for broke in a way you have to admire. That's undoubtedly what made the movie a hit, and the song a hit as well. All things considered, it's pretty easy to see why the Academy would decide to nominate it. Well, until you remember one important thing- "Danger Zone"!

After all, "Take My Breath Away" isn't the only song written for Top Gun. It's not even the BEST one! That honor clearly belongs to "Danger Zone", the TRUE theme to the film! I don't remember them playing "Take My Breath Away" in Top Gun: Maverick, but you can bet your ass they opened the film with "Danger Zone"! And why wouldn't they? It's badass! It sets the tone for the movie perfectly and gets you all jazzed up! Where's the nearest Naval Recruitment Center???

Well, anyway, my point is that you shouldn't be able to be declared the Best Original Song of the year if you're not even the Best Original Song of your own movie. Which is to say nothing of the songs "Take My Breath Away" beat out, including "Somewhere Out There" from An American Tail and "Mean Green Mother from Outer Space" from Little Shop of Horrors. Maybe those songs weren't as big of hits, but I know what I'd rather listen to.

But as is so often the case with the Oscars, very little of the decision making process is determined by what's actually the best. Part of the reason love themes do so well at the Oscars is that studios know they're a safer bet. They work better out of context, they inspire more powerful emotions, and they typically fit the standard idea of what makes for a good Oscar song. And I guess there are worse reasons one could win an Oscar.

In any case, it remains to be seen whether Lady Gaga's theme for Top Gun: Maverick will follow in the steps of "Take My Breath Away." It was fine, but it's certainly not iconic like the original's theme. Still, it's clear that the Academy likes her, and a Lady Gaga performance would certainly look attractive to viewers. And at the end of the day, isn't that what the Oscars are all about?