A Year in Shorts Day 343: "Mona Lisa Descending a Staircase"

Artsy films are hit and miss for me, and I assume it’s like that with everyone. But what about an artsy film that’s about art? Wouldn’t that be interesting? Well I think it is at any rate. Look, introductions are hard to do, alright? You try coming up with a new one every day for 343 days in a row! Anyway, we’re looking at Joan C. Grantz’s 1992 short, Mona Lisa Descending a Staircase. 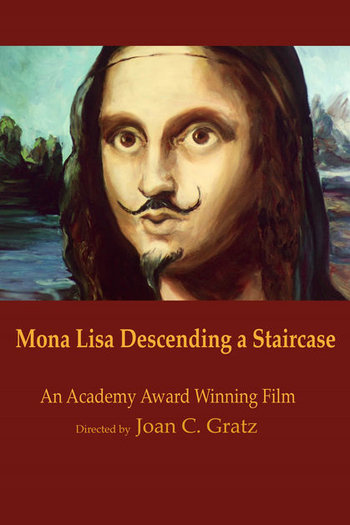 Light on plot but heavy on style, Mona Lisa Descending a Staircase is another one of those shorts made mostly to highlight the animator's talent more than anything. And when you've got talent like this, why not show it off? The film is mostly just a series of recreations of famous works of art, from the titular Mona Lisa to the works of such luminaries as Vincent Van Gogh and Andy Warhol. That might not sound like much at first glance, but it is pretty remarkable to see come to life, watching as the various pieces transform into one another. What makes this film especially impressive is the medium used, a sort of hybrid of claymation with the paint-on-glass technique, which gives the film a remarkable sense of depth while also maintaining an uncommon amount of fluid movement for a stop-motion short. The result is a film that's bewitching, beautiful and just silly enough to let you know it's not taking itself too seriously. That's a tricky balancing act to pull off, but Gratz makes it look easy!

A common theme for many of the shorts we've covered this month has been films which seem to mostly exist for their own sake. And while that certainly wasn't intentional, it has been interesting watching so many of those types of films in quick succession. While experimental films typically don't fare too well at the Oscars, it seems fair to say they do pretty well in the shorts categories; Mona Lisa Descending a Staircase won the Oscar that year, so clearly a lot of people responded well to it. And really, isn't the short the ideal form for the experimental film? Less pressure to financially deliver, more freedom for the artists, and- best of all- less of a chance to overstay their welcome! Mona Lisa Descending a Staircase may not be my favorite of these types of films, but it's certainly not the worst. It's a quirky, well-made film that affords its creator the opportunity to flex her skills, and an opportunity for us to get lost in the world of art for seven minutes. Can't ask for much more than that!