Greek mythology has served as the inspiration for a great many films, and a lot of them are pretty terrible. (Looking at you, the Percy Jackson films!) Hell, we covered one such example here in our Year of Shorts! But there’s a flipside to everything, and for every Greek Tragedy, there’s a triumph. Marcell Jankovics’ Sisyphus is one such film. 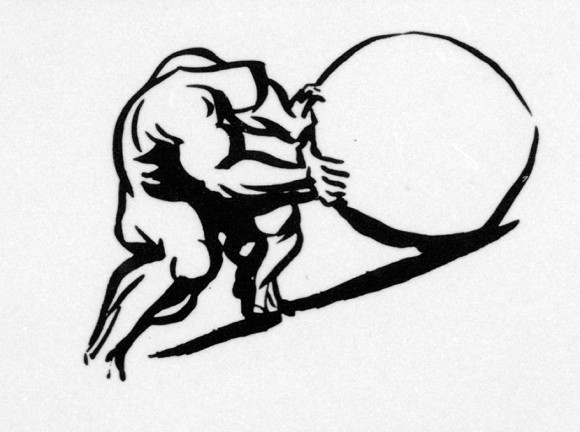 Released in 1974, Sisyphus is a Hungarian short (I'm pretty sure we've covered more films from Hungary in our Year in Shorts than most of us have even heard of in our lifetime!) depicting the myth of the titular character- a man condemned for eternity to push a boulder up the top of a hill, only to watch it roll back down again. (Millennia old spoilers, I guess.) At just over two minutes long, Sisyphus is another extremely short short, and not exactly one heavy on plot. (And yet in spite of this, there's still a twist ending!) Instead, Sisyphus is a film that's all about style, with Jankovics showing off what he can do with some very simple line drawings, a lot of negative space and one very dedicated voice actor. In a way, Sisyphus is animation stripped down to its simplest form; there are no fancy tricks or new technologies getting developed here. It's just pen on paper, drawings given life through the magic of animation. And it is really something spectacular to behold.

Once again, I find myself at the end of a short with not much else to say. Perhaps we can retroactively call this "Speaks For Itself Week?" (Lord knows it couldn't have come at a better time.) At any rate, the film is a marvel, telling a complete story in two minutes, creating a compelling character with just a basic outline, and managing to sneak in some visual humor without resorting to obvious gags. (I love how the boulder keeps getting bigger and bigger as it's pushed uphill.) The film is simple, yes, but that simplicity is a testament to both the power of animation and the talent of its animators. When you've got a little creativity and a great deal of skill, what more do you need?