As we ready ourselves to enter our last month in A Year in Shorts, I find myself looking back. And forward. And at this exact moment. Really just all sorts of different times, I’m looking at them right now. And it has nothing to do with any sense of nostalgia, and everything to do with today’s short, the 2014 Danish film A Single Life! 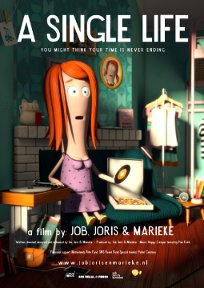 Directed by Marieke Blaauw, Joris Oprins and Job Roggeveen, A Single Life had a somewhat unusual road to the Oscars. According to this article I found, Job, Joris and Marieke (that's the name of the animation studio as well as the directors) intended it to be played in Dutch cinemas before various blockbuster releases. It wasn't until the film was completed that someone even suggested submitting it to the Oscars. Can you imagine something like that happening in America? The pre-cinema shorts we have here are terrible. I, for one, have no desire to see Regal's Dr. X-Plore celebrated the Oscars, and am grateful for the fact that such a thing will never take place. Luckily it's clear that Dutch cinemas just do it better, because A Single Life is an absolute delight from start to finish. And seeing as watching it from start to finish will take you less than two and a half minutes, why not watch and discover it for yourself?

A Single Life, arguably, qualifies as another entry in the proud tradition of Single Joke Shorts, albeit a better than average one. Yes, the whole thing is just setup for the punchline, but when the punchline is this good and the setup is this clever, how can you complain? Marieke Blaauw (who is credited as the sole writer on this short) had a great concept, and she and her co-directors executed it flawlessly. Building the entire film around the titular song is another nice touch, providing the short with a lot of energy as well as nicely spelling out the theme without being too ham-fisted about it. It's a nice note of complexity in an otherwise pretty simple short. Not that there's anything wrong with simplicity, of course; sometimes that's preferable. Admittedly the animation itself might not be up to the usual technological standards we've seen in our Year in Shorts, but it gets the job done, and the character animation remains expressive throughout. Besides, this short was intended as a pre-feature show in cinemas, so why nitpick?

Looking back to our first week of A Year in Shorts, I've discovered that it was all the way back then when we looked at Feast, the film which walked home with the Oscar that year. While it's certainly not a surprise that Feast took the gold (that's the power of Disney after all), it is something of a shame. Personally I would have gone with The Bigger Picture, which I think is one of the more visually impressive shorts we've looked at. But I wouldn't have minded if A Single Life had been the victor, either. It's the little short that could, and you gotta love an underdog story. Still, with such humble beginnings, I suppose the nomination itself is the reward. It certainly opened it up to a much wider audience, and the world of cinema is all the better for it.