During the 1990s, the world of animation was infested with films like Anastasia, Quest for Camelot and The Swan Princess, the desperate attempts of rival studios and animators trying to compete with the Disney Renaissance. Many of them failed, of course; people know a knockoff when they see one, and the wiser course of action would have been to offer something different. True, there were some films which managed to pull it off- The Prince of Egypt is just as good as the best of Disney’s output at the time- but they were the exception that proved the role. But we can take comfort in the knowledge that absolutely no lessons were learned. (If you don’t believe me, check out all the studios trying to create their own cinematic universe to rival Marvel.) At any rate, the lesson is clear- studios that aren’t Disney shouldn’t try to be Disney. As such, it seems almost unfair that Disney seems to be significantly more successful at imitating other studios. And that logic apparently applies to their partners as well, as can be seen by the 2008 Pixar classic, Presto. 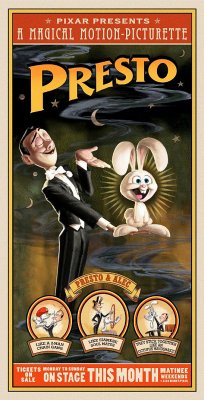 Released in theaters before WALL-E (a movie with its own important and controversial place in Oscar history), Presto makes it pretty obvious who its influences are right from the very beginning. Even with the opening titles, Doug Sweetland wants you to know this is going to be a Tom and Jerry/Looney Tunes homage. (Sadly he doesn't go all the way by having the credits done in the opening title cards, but I suppose there are guild reasons he can't do that.) And the premise itself is something straight out of a Tex Avery cartoon, with the titular magician Presto earning the ire of his rabbit, Alec, by forgetting to feed him. This is a bad decision under any circumstances, but especially in a cartoon. You see, Presto is no mere illusionist, but is instead in possession of a pair of magically connected hats which serve as a portal to one another. That, of course, is a dangerous thing to give to an undernourished bunny, and as you can imagine, hijinks ensue. And oh, what glorious hijinks they are! 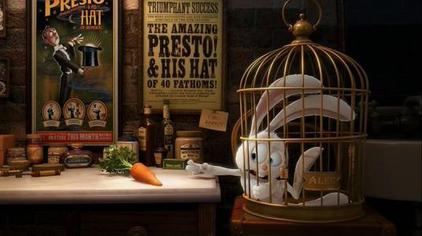 It should come as no surprise that the jokes take center stage in this short, taking the madcap physical comedy of the Warner and MGM shorts of the 40s and beautifully rendering it in a 3-D space. True, the short does not reach the same levels of lunacy that those cartoons often did (so don't expect the rabbit to pull some dynamite out of nowhere), but it's nevertheless frequently creative with the tools at is disposal, using the theatrical setting to its full potential. Far from being a burden, I'd say the (relatively) grounded nature of this short is what helps make it so great. Computer animation has inherent limitations that hand drawn does not, and a little bit of structure goes a long way in making sure Presto doesn't get too crazy. But that doesn't mean it feels bound to be realistic either, with characters still squashing and stretching as they go through their ordeal. And the constant applause from the audience, apparently under the impression that it's all part of the show, just makes the whole thing funnier. If you love old school cartoon mayhem (or the works of the Marx Brothers, another stated influence on this short), you're going to love this.

It helps, of course, that Presto and Al have a great dynamic; Presto is not only a neglectful owner, but a pretty mean one, taunting Al by pulling tricks on the carrot. This, of course, makes it all the more delightful when he gets his comeuppance, even if it seems just a tad disproportionate. At the same time, Presto is never downright cruel, which prevents the short from getting too mean-spirited. (Not that I'm against a mean-spirited cartoon of course, but it's not something one expects from a Pixar short.) This is especially important because, unlike most Looney Tunes or Tom and Jerry shorts, Presto also has a little bit of heart to it. Not too much to make it overly sentimental, but just enough to remind you that it's a Pixar cartoon. In this way, Presto owes a little to ANOTHER influence of Sweetland's, Charlie Chaplin, and his famous mantra, "First a laugh, then a tear." (The Chaplin influence was even stronger in WALL-E, of course, so I guess those of us who saw it in theaters got a crash course in classic comedy.) Now granted, Presto's not going to make you bust out the tissues. But it's got a nice message about friendship and cooperation at its center, much like The Emperor's New Groove before it. Perhaps that's the secret to Disney capturing that Warner Bros. magic. You can go as dense and wacky as you want, just don't lose sight of your roots.

Whatever the case, Presto is a delightful time at the movies, demonstrating that it's possible to recreate an old school sense of humor in the modern age. Combining classic comedy with gorgeous 3-D animation, Presto is more than just a mere throwback. (Admittedly that wasn't enough to win it an Oscar, losing the award to The House of Small Cubes. Which... I mean, you can't argue with that.) Today's post adds to the series of goodbyes that have come to define the home stretch of our Year in Shorts, being the last Pixar short we're talking about this year. But as the nomination for last year's Burrow proved, it'll only be a matter of time before we talk about them again. And if their Spark Shorts contain half the wit and charm of today's, we're in for a pretty great time.

"Presto" is available to watch on Disney +