A Year in Shorts Day 330: "My Financial Career"

While the animators at UPA were the pioneers in the field of limited animation, they were far from the only practitioners. And while few ever did it as well as they did, there were plenty of studios which managed to pull it off pretty well. The National Film Board of Canada, for instance, did a decent job with today’s short, Gerald Potterton’s 1962 short My Financial Career. 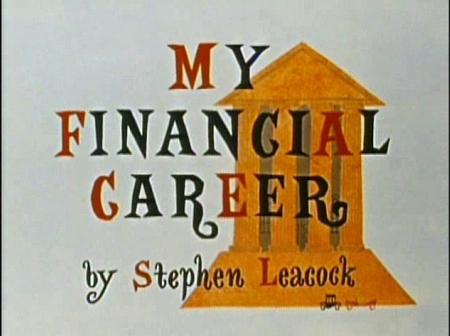 Based on a story by Stephen Leacock, My Financial Career takes a humorous look at the bureaucratic nightmare that is the world of banking. It follows the story of an average young man (voiced by Stanley Jackson) with a horrible fear of banks and a tendency to act irresponsible with his money. Unfortunately the man finds himself in possession of more money than he knows what to do with, and has to eventually face his fears. What follows is a pretty silly, straightforward tale of a man who lets his anxieties and awkwardness make things a great deal more difficult than they need to be. Now while I might not be able to relate to something like that, I'm sure some of you can. And in either case, there's a lot to enjoy in this charming, clever little short.

All things considered, My Financial Career is a fairly humble film. Potterton doesn't try and reinvent the wheel or tell a complex, emotional story. Hell, he doesn't even go for big belly laughs, instead making a short that's more likely to elicit a chuckle than anything else. Still, he does what he sets out to do well enough, and sometimes that's all one can hope for. And if nothing else, the animation in this short must be commended. While it's undoubtedly very simple, with crude character designs and extremely limited movement, it's nevertheless distinct and nice to look at. I especially enjoy the abstract way Potterton plays with perspective, most notably during the scene in the manager's office. The top of the manager's desk seems to be on the same plane of existence as the profiles of the two characters, which is a pretty clever way to draw what otherwise might be an unremarkable scene of two characters speaking. Arguably it's the sort of thing that works better with limited animation; if the shot were too complex, such tricks might look cluttered and confusing. But by stripping a scene down to its bare essentials, it gives Potterton more room to experiment. This "less is more" approach extends from the general layout (such as the exterior shots of the bank in an otherwise featureless void) to the character animation, which manages to be remarkably expressive given the simplicity of the designs. But some people really do manage to convey more with a few simple lines than the most complex of animation. 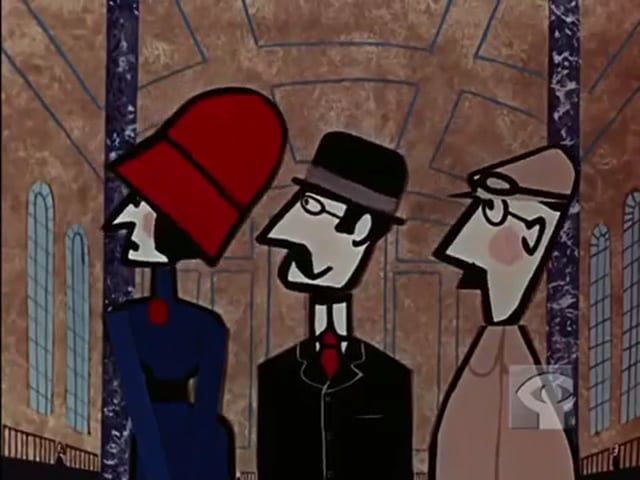 And perhaps that, more than anything, is what gives My Financial Career its charms. While Potterton doesn't stray too far outside the box as far as storytelling is concerned, he manages to find room within the box to make a short that's unique and quirky in its own ways. And sure, it may not be as "interesting" as the recently covered Pianissimo, which was also nominated that same year (I swear to God I didn't plan it this way), but it's a little more accessible and a lot more entertaining in my book. I'm not surprised it didn't win the Oscar (The Critic really stands out above the pack that year), but I'm glad it was nominated. Sometimes it's just nice to watch a simple cartoon, you know?