If I’ve said it once, I’ve said it a thousand times- some films are just plain damn weird. Oh sure, experimental cinema is often very daring and groundbreaking, pushing the limits of what filmmaking can be in bold and unexpected directions. But there’s no denying that most experimental films are still plain damn weird. And while I have nothing against films that are just plain damn weird, I do admit that I find them a little more easily digested as a short than a feature. And even then, sometimes that’s pushing it. Will that be the case with Carmen D’Avino’s Pianissimo? Well, let's find out. 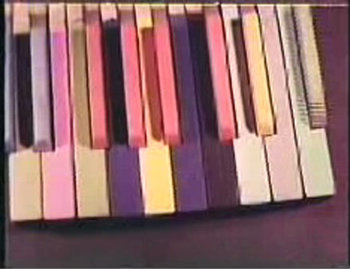 Before we begin, I would be remiss if I didn't confess that the only version of Pianissimo I was available to find online is a horrible bootleg, so I'm not seeing the film at its best. Considering the fact that this short was released in 1963 (and that the director passed away seventeen years ago), you would think that copyright holders wouldn't be quite so strict. Besides, this film isn't even legally available to stream, so it's not like anyone's making money on it either way. This is especially annoying for a short like this, which has no narrative to speak of and relies solely on its visuals. What are those visuals you may ask? Well, it's a stop motion player piano that gets going, resulting in a bunch of trippy shit happening for six minutes. What does all of it mean? I'm probably the wrong guy to ask. From where I'm standing, it more comes across as a chance for Carmen D'Avino to show off his skills, although I suppose that's rather ignorant of me. (As an aside, D'Avino would receive a second Oscar nomination ten years later, for his documentary short Background, a film that's even harder to find online than Pianissimo.) Pianissimo is undoubtedly a very avant-garde film, and I'd be lying if I said I understood those kinds of things.

But I try not to let my lack of understanding result in a lack of enjoyment, and I find Pianissimo pleasant enough for what it is. It's not exactly the type of short I would seek out, but it's bright and colorful, and at the very least the animation is impressive. The artsier among you are bound to get more out of this then I do, but that's not to say it's not worth a watch. It's good to branch out of your comfort zone from time to time, and films like these deserve at least a chance. Still, I must confess that Pianissimo mostly reminds me of the type of cartoon being parodied in The Critic- nice to look at, hard to understand, and almost definitely a little bit perverted. And considering the fact that The Critic beat Pianissimo for an Oscar that year, perhaps we can assume a large portion of the Academy agreed with me on that one.