Folks, it's my birthday this week. And as I do every year, I plan on spending the next seven days spoiling myself as much as possible. (Typically my birthweek celebrations start on the first day of the week of my birthday, but I had a dentist appointment yesterday, so I decided to delay the festivities a bit.) And my plans to spoil myself extend to my Oscar Baiting as well, with the next seven entries in our Year in Shorts covering seven of my absolute favorite short films. It’s going to be a good week folks, so let’s kick it off with Christoph and Wolfgang Lauenstein’s 1989 film, Balance! 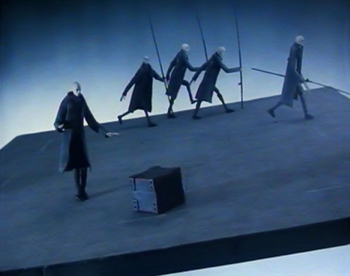 Balance is one of those special films where the story behind its making is almost as interesting as the movie itself. German synthpop band Alphaville commissioned the Lauenstein twins to develop the short to serve as a music video for their song "Middle of the Riddle" off their album The Breathtaking Blue. The brothers were presumably so happy with their work that they decided to create a separate soundtrack for the film and release it as Balance. I believe this makes Balance the only (technical) music video to win an Academy Award, although the mind reels at the possibilities. Imagine if the video for "Take On Me" had been released as a short film. That TOTALLY could have won an Oscar! Well, regardless, it's no surprise that the Launsteins decided to let Balance stand on its own. While its origin as a music video for a German synthpop band helps explain its origin and some of the initial creative choices, the film works wonderfully in its own right as a piece of surreal cinema and late Cold War-era storytelling.

As you no doubt noticed, Balance is a heavily allegorical film, reminiscent of the works of Luis Buñuel. Those types of films can be rather hit or miss for me, but I find that, on the whole, I typically enjoy them significantly more as shorts than I do as features. (Or, as in the case of Galder Gazetlu-Urrutia's The Platform, when they include cannibalism, which Balance unfortunately does not. It does include a platform though, which is more than you can ask for.) The message in Balance is not a subtle one, but it's certainly important, and I've always found subtlety to be overrated anyway. If you've got something important to say, say it loudly, that's my motto. Besides, what the film lacks in one department it more than makes up for in style. There's an undeniable strain of German Expressionism in this film, from the monochromatic color film to the creepy designs of its characters, calling to mind the look of Cesar from The Cabinet of Dr. Caligari. Fans of spooky, weird cinema will definitely want to give this one a look; despite not being a horror movie, it nevertheless has a delightfully eerie atmosphere. And in this day and age where everything even slightly unusual seemingly requires a long, drawn out explanation, it's nice to have a movie that just drops you into its weird world and expects you to deal with it. Who are these men? What's with the numbers on their backs? Why are they fishing? Who knows, who cares? 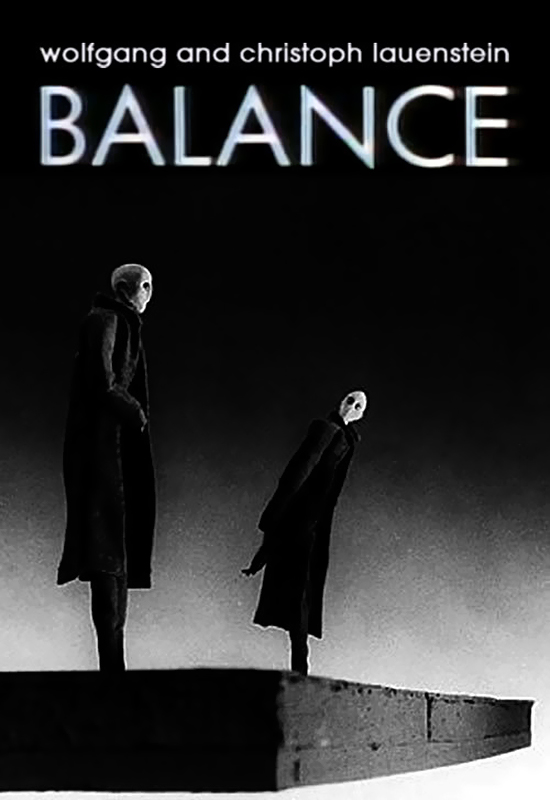 Granted, weirdness for the sake of weirdness does not automatically a good short make, despite what M. Night Shyamalan's sizable fanbase will tell you. Thankfully, the Lauensteins prove themselves to be masters of their craft, which makes Balance a delight to watch. In addition to the excellent stop motion animation (which you all know I'm a huge fan of), the film also benefits from impeccable sound design. The various creaks and groans of the platform really help sell the tension of the situation, and the sound mix on the box explains the heart of the conflict without having to sell it out. Sound is an often undervalued part of filmmaking (even by the Academy, who recently just decided to admit they didn't remotely understand the difference between Editing and Mixing by combining the two categories), but it's an absolutely vital component of this film's success. For comparison's sake, contrast the short film with the original music video. Both are good, of course, but without the sound effects during the main action, it doesn't just hit the same.

But either way you watch it, Balance is a film that's definitely worth your time and attention. The 1980s saw the release of some great animated shorts, and Balance ranks pretty high up on that list. An eerie and gorgeous film with a great streak of dark humor running through out and a good message to boot, it's hard to imagine someone who wouldn't like this film. But if for whatever reason it doesn't work for you, not to worry. I've got six more great coming your way!