Most of the animated shorts about World War II that we’ve recovered have been pretty jingoistic portrayals of war, designed to sell bonds and the like. Very rarely did a short deal with the horrors of war in a way that was honest and direct. One exception was George Pal’s Tulips Shall Grow, an entry in his very long, storied and extraordinarily bizarre “Puppetoons” series. So whatever you want to say about the film, at least it’s got honesty going for it. 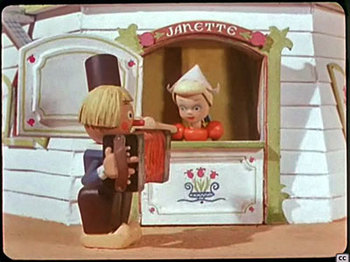 George Pal had a very interesting career, racking up seven Oscar nominations and one Honorary Oscar win. He directed the film adaptation of The Time Machine most people like, in spite of the fact that it's actually pretty bad. He directed 7 Faces of Dr. Lao, a movie I really like in spite of the fact that it's incredibly racist. He brought several Dr. Seuss books to life in the form of short films that I can not for the life of me find anywhere. But he is perhaps best known for his Puppetoons, stop motion animated shorts which utilized wooden puppets instead of your typical figures. I have seen a few Puppetoons and they are, to put it plainly, incredibly creepy. Still, that creepiness works pretty well for Tulips Shall Grow, a 1942 release about the horrors of war. Specifically, the horrors of a bunch of robotic tanks invading an idyllic Holland scene. I told you, it's weird.

In case it isn't clear, George Pal's Puppetoons aren't really for me. I find the puppet animation weird and unsettling, and the storytelling in these things are always just bizarre. And yet there is something about them which I find strangely fascinating. They have a style that is all their own, one which I might not like but certainly respect. And perhaps it is that off kilter sensibility which led him to create a wartime short so remarkably bleak as Tulips Shall Grow. For a film about a couple of puppets, this thing is dark. Add on top of that the fact that even the creepiest stop motion is incredibly impressive, and you've got a short that's really unlike anything else we've covered here. It's a very strange and bizarre short, but one that works regardless. And hey, it's not even a little bit racist. Which, sadly, is actually quite remarkable for this type of thing.