While it’s certainly gotten something of a reappraisal since its release, Brave is generally considered one of Pixar’s weaker efforts. And, frankly, for good reason. The story’s a mess, the tone is all over the place and there’s no real consistency to any of its thematic work. As much as I hate to say it, the whole thing often comes off like a poor man’s Brother Bear. And Brother Bear was already the poor man’s Brother Bear. But, just like with The Good Dinosaur, at least we got a damn good short to make up for it in the form of La Luna. 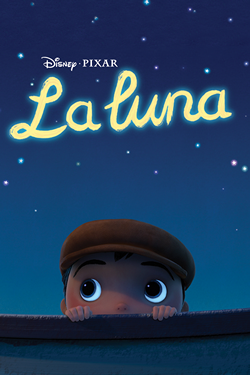 Like the feature it was attached to, Enrico Casarosa's La Luna is a fantasy film about generational differences in a family. In this case, that family is a grandfather/father/son team put in charge of sweeping the fallen stars around the moon to create its phases. Typical Hollywood, always returning to the same old stories. Still, while La Luna's premise is fairly complicated, its story is pretty simple. But it tells that story well. The animation is great; I'm a sucker for fantasy versions of space, and it's especially well done here. Of course, having a big ass moon directly over the ocean is kind of cheating (obviously that's going to look good), but I'll let it slide. The character animation is nice too, which is especially important in a short without any real dialogue. And tying it all together is a truly gorgeous score that tugs at the heartstrings even if the short itself doesn't quite deserve it.

La Luna really does cover a lot of the same themes as Brave, just better. It certainly helps that it's quite a bit shorter. And it probably doesn't hurt that they didn't randomly fire the director whose passion project it was. Yeah, that helps too. Whatever the case, La Luna is a lovely little short, even if it isn't Pixar's best. As I said just a few days ago, while the 84th Academy Awards weren't the best in Oscar history, but they still managed to recognize some gems. La Luna is a minor one, perhaps, but it's still precious all the same.

"La Luna" is available to watch on Disney +