In these increasingly turbulent times, it can often feel like our society is more divided than ever. So I suppose there can be some level of comfort taken from the fact that politics have always been fairly crazy and controversial. And, by extension, maybe we can take some level of comfort in knowing that there have also, apparently, always been spineless, candy-assed appeals to the vague, non-threatening ideal of centrism which are just blandly inoffensive enough to win a couple of Oscars. Case in point- today’s short, Is It Always Right to Be Right? 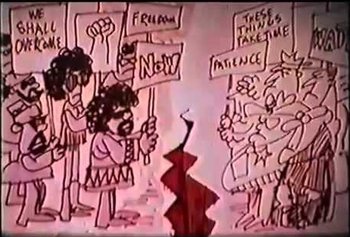 Released in 1970 and based on an essay by Dr. Warren H. Schmidt, Lee Mishkin's Is It Always Right to Be Right? is a parable about contemporary politics and the need for compromise. Through a mixture of cheap, ugly animation and pointlessly filtered stock footage and narrated by Orson Welles (who should have been far more embarrassed by this film than he was by Transformers: The Movie), the film tackles, among other issues, the generation gap and the Civil Rights movement. A refusal to compromise on these things, the film argues, is the root of all the nation's troubles. No doubt you've already begun to notice the problem at the heart of this movie- there are, simply put, some issues which can not be compromised on. There is no middle ground to Civil Rights, for instance, or the Vietnam War. Sometimes one side is just wrong, and humoring them accomplishes nothing but wasting time. The idea that anyone would find this film meaningful at any point in history is absurd; the fact that it was released in 1970 makes it downright offensive.

That would all be bad enough if the film were competently made, which I can assure you it is not. As I said before, the animation is ugly and cheap; the characters look like third-rate Gary Larson cartoons, and movement is so limited it barely deserves to be called animation. And the whole thing is washed in this sickly red color palette which somehow manages to make the whole short look worse. Welles' narration is bored and uninteresting, no doubt a result of this most likely just being a paycheck for him. Then there's the annoying score, which seems to mostly have been composed with the sound of feedback from someone's speakers. It's one thing for a film to be preachy, but does it have to be so aggressively bad, too?

In case you couldn't tell, I hate this short. And after some consideration, I have decided that it's only right to call this the worst film we've covered here so far, edging out The Crunch Bird (which, coincidentally, would win the Oscar the following year) by a narrow margin. Yes, The Crunch Bird was annoying, ugly and unfunny. But Is It Always Right to Be Right is all those things, while also being intolerably smug and four times the length! The Best Animated Short category would award some truly great films in the 70s (or at least some pretty good ones), but the first two years of the decade are some of the absolute worst in the history of the category. I can not recommend skipping this one enough.