While this year’s Oscar ceremony was a complete disaster (and I will die on this hill!), the actual nominees and winners were all better than usual. Of particular note was the increased representation in regards to the disabled community; Documentary nominee Crip Cramp was directed and produced by disabled people, Live Action Short nominee Feeling Through became the first film starring a DeafBlind actor to get recognized by the Academy, and Sound of Metal had a fair amount of deaf people in its cast, even if that didn’t include its stars. I’m going to go out on a limb and say that Stephen Palmer, director of today’s short Blindscape, probably isn’t blind himself, but he still made an interesting short that tries to put you in the shoes of another person in a unique way. And isn’t that what cinema is all about? 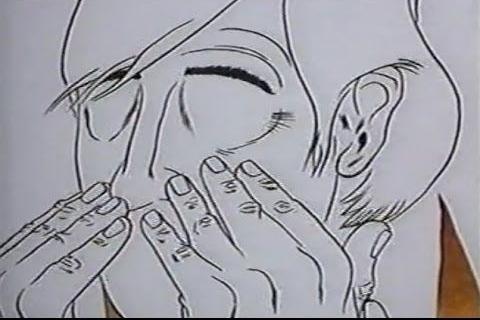 Released in 1993, Blindscape tells the story of a blind man waking up in a forest. (How exactly he got there is never explained, and not really important.) As the man relies on his senses to make his way out, the audience is mostly kept privy to only the surroundings he's aware of. Generally we can only see what he feels or hears (or sometimes, what he thinks he hears), and typically the things he's touching are in color while everything else is in black-and-white. As far as concepts go, it's a pretty neat one. An animated film is never really going to be able to give a viewer a real idea of what it's like to be blind (as a visual medium, film isn't really suited for that), but Stephen Palmer makes a pretty good go of it here. (Be warned that there's a sequence bound to trigger seizures in viewers with epilepsy.)

Of course, concept only gets you so far; execution is what's really important. And it's there where this short stumbles a bit, although not by much. Even at just eight minutes long, the film is a bit padded, often repeating the same idea a few times just for the sake of it. And while the idea behind the animation is cool, I find a lot of the animation itself fairly ugly, and the colors unpleasant. And there are some moments which are just weird, like the aforementioned seizure inducing sequence.

But in spite of all that, I do think Blindscape is a pretty good short, and certainly worth your time. It may not be a great film, but it is an interesting one, and it certainly tells its simple story in a way that's unique and effective. As Roger Ebert liked to say, movies are empathy machines, and judging by that metric, we must consider Blindscape a success.