As I’ve said before, I have a soft spot for the genre of short known as the fake instructional video. And a close cousin to that which I find equally endearing is the faux educational short, parodying the sorts of films you’d often see get riffed on episodes of MST3K. So as you can imagine, a film like Geefwee Boedoe’s Let’s Pollute is definitely something that holds a lot of appeal for me. 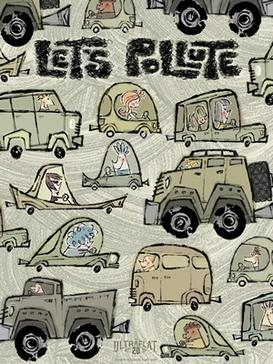 Released in 2009, Let's Pollute almost plays like a brutal parody of The Romance of Transportation in Canada. Starting off with a brief history of consumerism, the short soon celebrates the grand American of tradition, encouraging the viewer to waste as much as possible through the aid of colorful animation, upbeat music and an absurdly chipper narrator. (As a fun bit of trivia, the narrator in question is Jim Thornton, who has been the announcer for Wheel of Fortune since 2010.) While Let's Pollute is a comedy, it is admittedly an extremely dark one, especially when you consider that this film is twelve years old and very little has changed regarding our destruction of the environment. But the animation is nice to look at, and while the jokes are never hilarious, they are at least recognizable as jokes, which sets the film apart from most of the dark comedies that get released today.

As you can see, the whole thing is about as a subtle as a brick to the face. But as anyone who has seen Moulin Rouge! can tell you, subtlety is often overrated. Let's Pollute is not a classic short- it's a little shapeless and meandering, and I think more could have been done with the format- but it's got a strong message and it's entertaining enough. I don't know, maybe I just find the narrator very charming. For whatever the reason, Let's Pollute is a short that I'll recommend, even if it's not the greatest one we've covered.