Once again, and completely by accident, we’ve found ourselves producing a little bit of a themed run in our Year in Shorts. This current theme, combined with yesterday’s short from Chuck Jones, seems to be “People Who Directed Tom and Jerry, Even Though They Shouldn’t Have.” But while I have said and will continue to say horrible things about Gene Deitch’s tenure with everyone’s favorite cartoon cat and mouse, I want to make it clear that, just like Chuck Jones, he was a tremendous artist with a unique style and considerable skill. If anything, the fact that their runs on Tom and Jerry weren’t very good is a testament to that; they tried to bend their vision to someone else’s, and it just didn’t pan out. And while Gene Deitch isn’t a household name in the way Chuck Jones is, films like Munro make a pretty solid argument for why he ought to be. 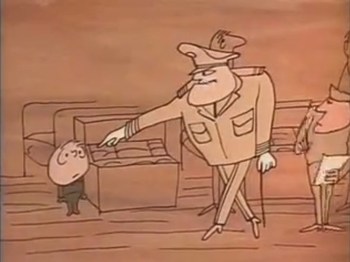 First released in 1960, but shown to American audiences prior to screenings of Breakfast at Tiffany's in 1961 (after its Oscar win), Munro tells the story of the titular Munro, a typical four-year-old boy who, through a freak twist fate, gets drafted into the army. And no matter how he tries to convince all the adults that he's just a kid, no one will listen to him. It gets so bad that he even starts to take their word over his. What follows is a darkly hilarious satire on army life as poor Munro tries to deal with his absurd lot in life, all done in the trademark Rembrandt style.

The main thing which makes Munro so great is its script, which is as sharp and funny as the story is patently ridiculous. Admittedly I am a bit of a sucker for films which take jabs at the absurdities of government bureaucracy (still haven't resolved my issues with unemployment!), but even if that wasn't true I'd love this short. Based on a short story by Jules Feiffer, Munro deftly lampoons the US military industrial complex without ever getting too preachy; it's a delicate balancing act which the film nails. The narration plays a big part in that, delivering pithy asides in a way that highlights the absurdity without overplaying its hand. Of course, great narration is nothing without a great narrator, and Munro was lucky enough to have comedian Howard Morris behind the microphone. Morris's laidback and sardonic delivery is really what ties this short together; he's funny to listen to without it sounding like he's trying to be funny. Dry humor like this is very difficult to pull off, but when it works, it's amazing. 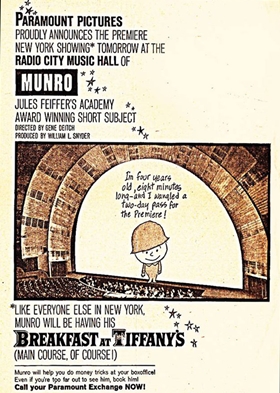 But credit must also go to the animation, which adopts a rather crude aesthetic to great effect. The minimalist backgrounds, simplistic character designs and limited use of color all come together to give Munro a unique and undeniably pleasing look. Some of the scenes reminded me of illustrations from Ludwig Bemelmans' Madeline books (which, as far as I'm concerned, is just about the highest compliment I can give a drawing), just without the colors. One thing that our Year in Shorts has really driven home to me is the simple pleasure of limited animation. Don't get wrong, I love the fancy stuff as much as the next guy, but there's something I find so utterly charming about films that keep it simple. It's not something you see a whole lot of these days, especially as hand drawn animation becomes more and more niche, but I wouldn't mind it making a comeback.

Munro won the Academy Award that year, and actually became the first animated short produced outside of the United States to do so. (Gene Deitch was American, but Rembrandt made their films in Czechoslovakia.) It beat out another Czechoslovakian short, O misto nan slunci, which it actually has a fair bit in common with, stylistically. The 60s saw a lot of experimental shorts nominated in this category, but very few hold as special a place in my heart as Munro.