One of the nice things about this blog is the wide variety of films I get to discuss. Any film nominated for an Oscar is valid, and thanks to the broad group of categories (not to mention the questionable taste of the Academy members), there are all sorts of interesting and quirky films I’ll get to talk about one day. Did you know Cecil Kellaway got an Oscar nomination for playing a leprechaun? Or that Face/Off, The Rock and Con Air are all Oscar nominees? And don’t even get me started on the films that the Makeup branch recognizes. (Norbit, anyone?) Still, not every film can get nominated for an Oscar, and eventually some films will fall outside of my purview. One such film is the 2009 film 9, which is not to be confused with the 2009 film Nine, which DID get nominated for a few Oscars, although by all accounts it shouldn’t have been. No, I’m referring to the animated 9, directed by Shane Acker and starring Elijah Wood and Christopher Plummer. It wasn’t a great film (and the ad campaign was trying a little too hard to be edgy), but I thought it was fun. It may have been Diet Tim Burton, but that’s not such a bad thing to be, especially since Tim Burton himself doesn’t seem to be able to manage that. Did you see Miss Peregrine? That was like… Tim Burton Zero, at best. Sadly, 2009’s 9 was ignored by all the major awards bodies; even if I started spinoff blogs like The Pretty Good Golden Globe Baiter or The Smashing BAFTA Baiter, I wouldn’t be able to cover it. But luckily for us, 9 was based on a short film which DID manage to secure itself an Oscar nomination. So without further ado, let’s look at Shane Acker’s 2005 film, 9. 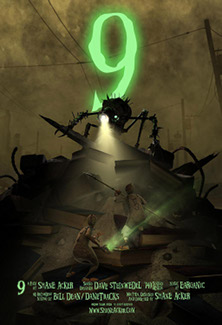 9 is a science fiction adventure story following its titular character, a sentient rag doll (or a "Stitchpunk") living by himself in a post-apocalyptic wasteland. Throughout the wordless short we follow 9 over the course of a typical day, finding bits of garbage and escaping from mechanical monster who wants to suck out his soul. (If I've seen it once I've seen it a hundred times.) From a plot perspective the whole thing is pretty simple. In many ways this short actually has quite a bit in common with Canhead, if Canhead were CGI and not a comedy. Still, Shane Acker shows a keen understanding of pacing and tension, which makes the extended chase sequence that makes up a bulk of the short's run time consistently entertaining. And let's be real here- this short didn't get Tim Burton's attention for its story so much as its style. And the short certainly has style to spare. You can find out for yourself by watching it on Vimeo, where Shane Acker has been so kind enough to post it for free. Thank you Shane!

In what has become a minor theme here in our Year in Shorts, 9 began life as a student film. It really is remarkable whenever a student film gets an Oscar nomination, even if you can't help but get a little jealous. It'd be like if I got a Pulitzer nomination for one of my Shakespeare essays or something. Regardless, it's not hard to see why it caught the eye of both Tim Burton and the Academy. Sure, it's not the best short we've covered here, and its animation is very "mid-2000s CGI." But considering the fact that this wasn't a professional production, that's actually pretty damn impressive. And any limitations in budget or technology can always be overcome with skill and creativity, which Shane Acker clearly has a great deal of. The Stitchpunk design is somehow simultaneously very creepy and very cute (which Acker would go on to perfect later), and the monster chasing after 9 manages to strike a balance between looking "badass" without seeming like it's trying to hard. The short might not be quite as impressive an achievement as Canhead, but you still have to respect the work that went into it.

In both short and feature length, Shane Acker's 9 is definitely a story that's worth your time. (It helps that the feature film is just eighty minutes long, so it's not like it's asking a lot of you to watch it.) And while Acker didn't win the Oscar (nor did he get a nomination for his feature debut), it's still a pretty remarkable success story all around. I mean come on. His student film got him an Oscar nomination and a feature film to direct? He got to work with Christopher Plummer! So often in cinema, the mere existence of a film is its own reward; everything else is just extra. And sometimes, with some skill, hard work and a fair but of luck, that "extra" leads to a whole lot more.