They say that all good things must come to an end, and unfortunately that includes the Golden Age of Tom and Jerry. There exists some debate as to exactly when that was. But for the purposes of our blog, we’ll just go ahead and say that it was when they received their final Oscar nomination. Still, if the good old days must come to an end, at least you can end them on a high note. And while Touché, Pussy Cat! might not be an example of the series at its best, it’s still a good time regardless. 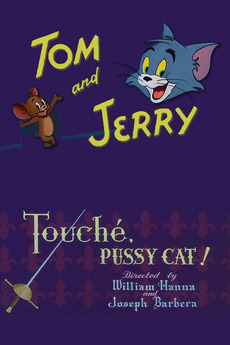 As you can probably guess from the title, Hanna and Barbera's 1954 film Touché, Pussy Cat! is a follow-up to their previous Tom and Jerry short, The Two Mouseketeers. I guess technically you could say it's a prequel, as it tells the story of how Nibbles came to join the Mouseketeers. Of course, this is Tom and Jerry we're talking about, so canon is not exactly something we have to concern ourselves too greatly with. 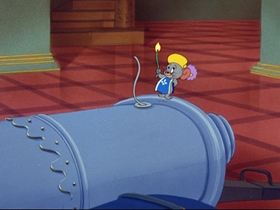 By contrast, cannons are something which should always concern Tom.

Still, while we don't have to worry about Touché, Pussy Cat! unnecessarily complicating or pointlessly retconning the oh-so-important Tom and Jerry mythos, I do think its status as a prequel hurts the short a bit. As Nibbles is the D'Artagnan to Jerry's other three musketeers, he essentially acts as the main character for this short. This is a problem, naturally, as Nibbles is not a particularly great character to build a short around, even if speaking French makes him more tolerable. This is the "Tom and Jerry" series after all, not "Tom and Jerry and Nibbles", and the poor little guy just isn't leading man material. Still, at least Jerry gets a decent supporting role in this short. Poor Tom barely qualifies as a cameo this time around, which is borderline unforgivable. You can have great Tom and Jerry shorts that barely feature Jerry; Heavenly Puss is proof of that. But a great Tom and Jerry short that barely features Tom? That doesn't seem possible. 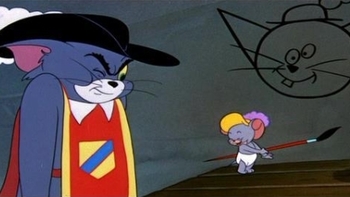 Which isn't to say that Touché, Pussy Cat! is a BAD short, of course. As my introductory paragraph states, I think it's still an enjoyable time. The background animation (while seemingly recycled from The Two Mouseketeers) is up to the series standard, and the cartoon violence is as good as it ever was. Even if I'm not a huge Nibbles fan, it still is fun to watch Jerry getting frustrated with his incompetence, and "fun to watch" is really the most important thing for a Tom and Jerry short.

And yet there's just something about this short that doesn't quite work. I think it's safe to say that by 1954 the Tom and Jerry formula may have begun to grow a little stale. There's only so many permutations of cat vs. mouse you can do, and after over a decade we can't blame Hanna and Barbera for running out of ideas. There's an almost perfunctory feeling to this short, as if everything that happens does so more out of a sense of obligation than any real desire to see where the story can go. Tom shows up halfway through the short not out of a set of comic circumstances but because that's what we expect. Yes the short is still funny, but a lot of the surprise is gone. 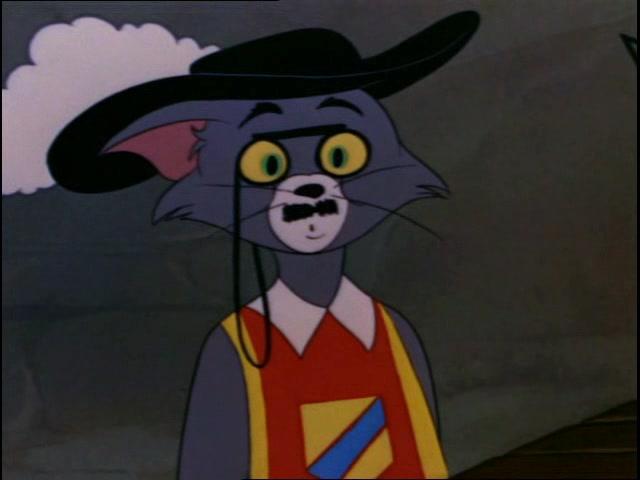 The character animation isn't quite right either. As I'm not an animation expert I can't really explain why it looks off, only that it does. There's a strange flatness to Tom and Jerry that makes them look cheap in comparison to the more detailed backgrounds. This is a problem that would stick with the series for years after this, especially in the unfortunate Gene Deitch and Chuck Jones eras. I suppose it really isn't much of a surprise that Touché, Pussy Cat! was the last entry in the series to receive an Oscar nomination, then. There is a definite sense of diminishing returns after this point, with a great deal more emphasis on cute characters like Nibbles and Quacker. There were some iconic entries produced here and there (most notably Blue Cat Blues, probably the most infamous short of the entire series), but they could never recapture the magic they had in their golden age.

But hey, no one can say they didn't have a good run, and over a decade of success is nothing to sneeze at. And if it seems like I'm being overly harsh on Touché, Pussy Cat!, it's only because I have such high standards for the series as a whole. Viewed on its own, Touché, Pussy Cat! is still a fun little short that's definitely worth a watch if you haven't had the chance yet. And while this may have been the end for Tom and Jerry's run as Oscar darlings, it isn't the end for their run here on The Great Oscar Baiter. We've got a few more of their films to cover still in our Year in Shorts, and I, for one, will enjoy every minute of it!

"Touché, Pussy Cat!" is, for some reason, not on HBO Max. Make of that what you will.