If there’s one thing I know absolutely nothing about, it’s Canadian folk music. And I’m willing to bet you don’t know much about it either. But today we’re going to learn a little more, as Wade Hemsworth’s popular 1949 song “The Black Fly Song” served as the basis for the less popular 1991 short Blackfly. And I hope you found that fun fact interesting, because that’s about as interesting as it gets with this film. 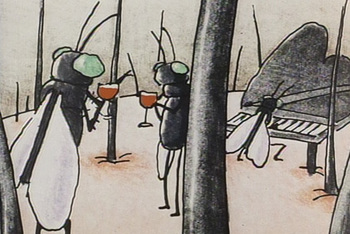 Both the short film and the song it's based on tell the story of a surveyor sent to North Ontario, only to be beset upon by a band of ravenous flies. (In case you couldn't guess from the premise, this is another short produced by the National Film Board of Canada.) Throughout the short we watch the surveyor resort to drastic and desperate measures to avoid them while also watching the flies doing random things one doesn't expect flies to do. (Flies doing a chorus line? Why I never!) All of this is set to a recording of the song (sort of like another NFBC short, The Cat Came Back), which is pleasant to listen to and only mildly annoying. It is, in my opinion, a fairly thin premise for a short, playing more like someone tried and failed miserably at turning a Far Side cartoon into a movie. But I suppose it passes quickly enough. Maybe you'll find more to like about it than I did!

There are a fair amount of shorts like this out there, and if I'm honest they very rarely work for me. There's never anything particularly wrong with them, they're just not very fun to watch. The gags here are pretty simplistic and the animation isn't much to look at. It's intentionally simplistic, yes, but not in a way I find interesting or engaging. In fact that pretty much sums up this short. It's perfectly serviceable for what it is, but what it is doesn't amount to much. It's not much to watch, not much to write about, and, unfortunately for you, not much to read about either.