Song of the Week #13: "Bibbidi-Bobbidi-Boo"- Cinderella

The Academy Awards have come and gone, and in the wake of all the controversy, we all overlooked one thing- “No Time to Die” beat “Dos Oruguitas” for Best Original Song! Not only was that a terrible decision on the Academy’s part, it also meant that I was wrong in my predictions! And perhaps it proved people right when they said Disney should have submitted “We Don’t Talk About Bruno” as Encanto’s song. After all, Disney didn’t always get nominated for its serious songs. For proof of that, look no further than Cinderella’s “Bibbidi-Bobbidi-Boo.” 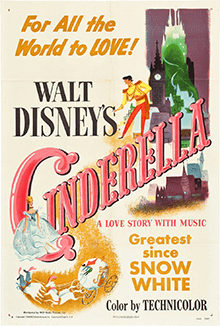 Disney's 1950 film Cinderella is an odd duck of a motion picture. The studio's first animated smash hit since Snow White and the Seven Dwarfs, it might also be the platonic ideal of what people think of as a "Disney Movie." It's got everything- a prince, animal sidekicks, singing and dancing, dead parents. It is also, quite frankly, not very good. Oh sure, the animation is pretty great, excluding the horrific rotoscoping of Helene Stanley to produce the nightmare doll that is the title character. And yeah, it's got a few laughs, mostly courtesy of the king's violent outbursts. But it is far from a classic. Way too much time is spent on animal hijinks (especially the horrible, horrible mice), at the expense of the character development for the actual leads. The prince has maybe four lines in the film, it's absurd! And the fairy tale nerd in me can't quite forgive just how many misconceptions about Cinderella Disney managed to make stick in everyone's mind; for example, the idea that Cinderella is her real name and not some horrible, cruel teasing. And the music... well, let's just say, when a song like "Bibbidi-Bobbidi-Boo" is the highlight of a film's soundtrack, you know it can't be a particularly good one.

You probably know enough about Cinderella that I don't need to spend too much time recapping it. As you can tell from the video above, "Bibbidi-Bobbidi-Boo" is the Fairy Godmother's song, performed as she fixes up Cinderella with a dress and coach. The scene is certainly a highlight of the film, showcasing some truly stellar animation as the Godmother transforms mice, a dog and a pumpkin into something one could bring to a fancy party. As for the song, it... well it mostly seems to be there because this is the sort of scene one would have a song for in a Disney movie. Which isn't to say it's bad, mind you. The music by Mark David, Al Hoffman and Jerry Livingston (yes, it took three people to write this) is bouncy and catchy, and the lyrics are... well, they're mostly nonsense. And hey, there's nothing wrong with nonsense lyrics. Some of the best Disney songs have nonsense lyrics. This isn't one of them, but still.

One issue I have with this song is that it doesn't really feel like a song so much as it does half a song with a spoken word poem attached to it. And sure, what is a song but a spoken word poem set to music? Well it turns out there's a difference, and this song demonstrates that perfectly! This half song complaint applies to pretty much every song in Cinderella, and a large number of Disney songs pre-Sherman Brothers. None of the numbers really go anywhere- they just sort of show up, do their thing, and then stop. There's no shape to any of the songs in Cinderella, and "Bibbidi-Bobbidi-Boo" is no different. I guess on the one hand it's not really fair to judge them that way; Cinderella was not sold as a musical, after all, but a "love story with music." Granted, the love story sucks, so the music ought to be doing a bit more heavy lifting.

I'm probably being too harsh, at least on "Bibbidi-Boddidi-Boo". Hell, at least it's memorable, and not in annoying way! Disney mainstay Verna Felton is always a welcome presence, and she certainly makes the most out of her biggest number. And the spoken word section has some funny parts to it, with the Fairy Godmother setting up rhymes to make it seem like she's going to give Cinderella a new dress, only to keep turning animals into other animals. And who am I to turn my nose up at a good old-fashioned Disney disembodied (Disneybodied?) choir? Am I really too good for a bouncy little number like this? And besides, what other song were they going to nominate? The opening credits tune? Boring. "A Dream is a Wish Your Heart Makes"? Also boring. "So This is Love"? Even MORE boring!!! "Sweet, Sweet Nightingale"? Well... maybe. But again- not a full song! And it could be worse- they could have nominated "The Work Song"...

So clearly "Bibbidi-Bobbidi-Boo" was the best option. And it's not like they couldn't just not nominate the movie! It's a Disney movie for God's sake, you HAVE to acknowledge it! I mean... aside from the two other nominations it already got, I guess. Still, much like with "Dos Orugitas", the power of the Mouse wasn't enough to rocket it to Oscar glory, with the award for Best Original Song going to "Mona Lisa" from Captain Carey, U.S.A., a movie I'm sure we all love and remember. Mack David would go on to be nominated seven more times, two of them with Jerry Livingston in tow- hell, we've already covered one of them! The same could not, unfortunately, be said for Al Hoffman, who would write songs for one more movie (Disney's Alice in Wonderland, whose songs were generally much better than Cinderella's) before dying in 1960. So, if nothing else, at least the nomination for "Bibbidi-Bobbidi-Boo" allowed him a place in Oscar history, however small it may be.