We’ve discussed a lot of bad animated shorts from the 1930s, and they’ve typically been bad for one of two reasons- overly cutesy animation that’s just obnoxious or horrible, horrible racism. Well, I’m glad(?) to say that today’s short, the 1938 film Hunky and Spunky, has neither of those problems. No one could call the film cutesy, and it’s not going to offend anyone. No, Hunky and Spunky manages to be completely unique in how utterly terrible and unwatchable it is. Which is not much of an achievement, but it’s something! 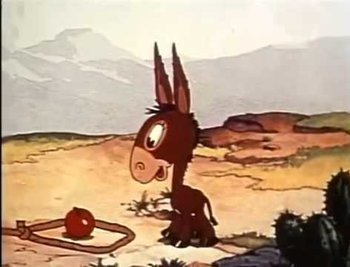 Directed by Dave Fleischer, Hunky and Spunky is NOT, despite what the title might lead you to believe, a cartoon about a kind-hearted himbo and a free-spirited gal going on adventures together, nor is it about two muscular gay gentlemen having some sort of erotic romance while going on adventure together. Sorry to disappoint you. Instead, it is the first entry in a series of cartoons about two donkeys, a mother (Hunky) and her son (Spunky). Presumably their cartoons also consist of them going on adventures together. In this particular short the titular duo are going through the Old West when Spunky is kidnapped by a wily old prospector (are there any other kind?) and Hunky has to ride to the rescue. (As an aside, it's a little weird to me that Spunky's mom is named Hunky, but I suppose that my views on gender norms are not as enlightened as the boys at Fleischer.) On the surface, this doesn't sound like a terrible premise for a cartoon; dare I say, it might be cute? And indeed, on paper, there's nothing terribly wrong with Hunky and Spunky. It's just when they actually made the damn film, the team made one fatal mistake. It probably seemed like a small decision at the time. And yet it had disastrous consequences that took what might otherwise be a forgettable Fleischer cartoon into something borderline unwatchable. What do I mean by this? Well... you really have to watch the short for yourself to understand. Or, I suppose to be more accurate, you need to hear it.

Yes, for reasons that I'm sure made sense to someone in the creative process, the filmmakers decided that Hunky and Spunky needed to sound like donkeys. And I suppose there's some sense in that. I mean, look at Disney characters- Mickey's voice is high-pitched because he's a mouse, Donald's voice sounds like a quack, I can follow the logic. Still, Mickey and Donald don't actually speak like their animal counterparts so much as they capture the essence of them. Hunky and Spunky, on the other hand, sound like a couple of donkeys given the ability to speak through the darkest magic. It sounds as painful for them to speak as it is for us to hear it! It's like the voice actors were told to gargle rusty tin cans while delivering their lines! And that'd only be ok in a cartoon about goats! The voice acting in this short is annoying is what I'm trying to say. Granted, the voice acting in a lot of 30s shorts is annoying. Honestly until Mel Blanc came onto the scene, there were slim pickings when it came to tolerable voice work in cartoons. (This is probably why so many of the Silly Symphonies were silent!) Still, there comes a point when voice acting crosses the line from being annoying to qualifying as an assault on the ears, and Hunky and Spunky has certainly found it! 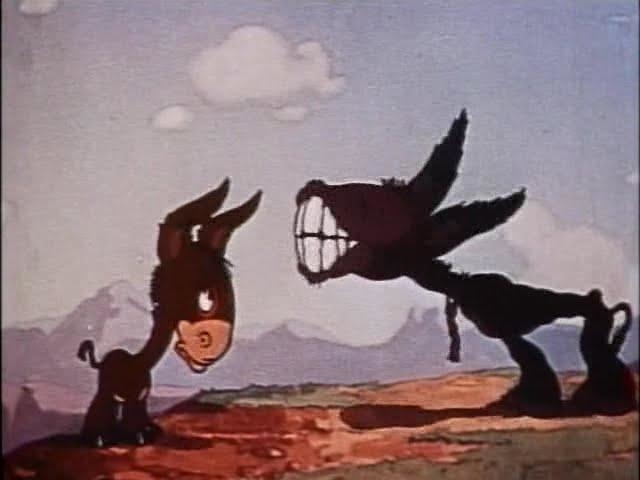 The fact that Hunky and Spunky spawned a series of shorts is downright baffling to me, because I genuinely can not conceive as to why anyone would watch any more of these characters. Of course, I suppose I can't really understand why anyone would nominate this short for an Oscar, either. It's not as if there's anything particularly special about it. The animation is ugly in the way that the bad Fleischer cartoons were ugly, which is pretty bad when we're supposed to find at least one of the characters cute. Is this really the same director and studio which not two years earlier brought us Popeye the Sailor Meets Sindbad the Sailor? Where did all that visual flair and technical skill go to? I hesitate to use the words "lazy" or "cheap" when describing any animated film because, let's be frank, I have no fucking idea what I'm talking about, and any piece of animation takes a considerable amount of effort on the part of the people who make it. Regardless, I think it is at least fair to say that the Fleischers may have put a little more into their Popeye shorts than they did Hunky and Spunky.

The short is interminably paced too, without any actual gags to fill up the needlessly long run time. Oh no, forgive me, there's one gag, when the prospector uses a jack to lift Spunky off of his feet. But the rest of the film is just filled with non-comedy and filler. Surely we didn't need the first minute and a half dedicated to a generic Western song, or thirty whole seconds of Hunky and Spunky just laughing to each other? Couldn't we have just gotten to the prospector so the whole thing could be over with more quickly? Really, the best thing I can say in Hunky and Spunky's favor is that it isn't racist or anything. It's hard to imagine this short being any worse than it is, but I suppose that having Spunky be kidnapped by a caricature of a Mexican bandito or a Native American chieftain would probably just be the icing on the cake. So there you go, slap that on the DVD box set- "Hunky and Spunky- At least it's not racist!" Obviously I'm joking. You wouldn't put anything on the box set because who the fuck would want to own Hunky and Spunky?

Going to a donkey show with Dr. Kelso sounds like a better time than watching Hunky and Spunky again.

I haven't seen all the animated shorts of 1938, but I simply refuse to believe Hunky and Spunky was one of the best. And even if it was, they still shouldn't have nominated it! We have covered our fair share of terrible films in our Year in Shorts. But I have to say that Hunky and Spunky easily takes the crown jewel when it comes to the worst short we've looked at, and I don't see it losing its crown any time soon in the next eleven days. While other shorts may be more offensive or less technically proficient, none have been so bad across the board like Hunky and Spunky. It ranks up there with films like Suicide Squad and Transformers: Revenge of the Fallen as some of the absolute worst Oscar-nominated films I have ever seen. If I never see it again, it'll be too fucking soon.