A Year in Shorts Day 352: "The Family That Dwelt Apart"

E.B. White hasn’t had great luck when it comes to film adaptations of his work. He and his wife famously hated the animated adaptation of Charlotte’s Web, and I doubt they’d be much pleased by the live action version. Stuart Little was a loose adaptation at best (fun fact- did you know it was cowritten by M. Night Shyamalan?), and The Trumpet of the Swan got released straight to video! Still, one story of his got turned into a great film, and that brings us to today’s short- Yvone Malette’s The Family That Dwelt Apart! 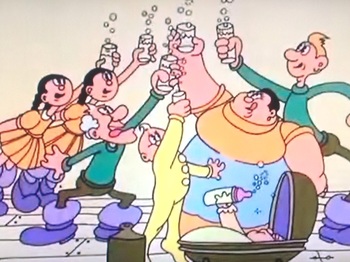 Released in 1973, The Family That Dwelt Apart is another film from our friends at the National Film Board of Canada. It tells the story of the Pruitts, a family of fishermen who live by themselves on a private island. They lead a pleasant and private life of isolation, until one winter when the bay freezes over and the mainlanders take it upon themselves to mount a rescue mission. Unbeknownst to them, however, is the fact that the Pruitts don't need rescuing, resulting in a unnecessary deaths, destruction and a great deal of wasted money. It is, in short, exactly the type of short I like, combining screwball plotting with a jet black sense of humor and dry, sardonic wit. The latter is provided mostly by the narration by E.B. White himself, who once again demonstrates the importance of underselling the joke to make it land harder. (Is that a Canadian thing? It seems to be a pretty common thread amongst a lot of the NFBC shorts we've covered.) Of course it helps that he's got great material to work with; most of the fun in watching The Family That Dwelt Apart comes from the way things are written, the little asides and extraneous details which flesh out the story and make it pleasant to listen to. White brings his words masterfully to life, and it's a joy to watch.

Really, the only criticism I have for this short is the animation. Not that any of it's bad; in fact, on a technical level, it's quite good! The movement is fluid and the colors are great, so I'm not impugning anyone's skill here. My issue with the animation is mainly an aesthetic one. Every character is drawn in this overly cutesy way that brings to mind a lot of animated shorts from the 1930s; it's no doubt meant to be ironic, but it's just not a style I like to look at. That tendency to exaggerate also leads to a rather bizarre moment when one of the characters on screen is a fairly offensive caricature of a Chinese person. It's over so quickly it barely registers, and yet someone spent a lot of time making it happen! The animation is also filled with a lot of random visual gags which don't really contribute anything to the story and feel more like the filmmakers were self-conscious that the film wouldn't be entertaining enough on its own. Spoiler alert- It would be!

But while these details might detract somewhat from the short, they don't ruin it. The central story is so strong and entertaining, it'd take a lot more than that to be turned into a bad film. Sadly, that wasn't enough for the Academy, who gave the Oscar to Closed Mondays instead. I guess I can't really blame them; that short is certainly more technically impressive, which has to count for something. Still, I know which short I'd rather watch, and which one gets a heartier recommendation from me!