Anti-smoking commercials are a real drag, man. Preachy, poorly made and very often incredibly stupid, they often lead one to wonder just how many people they actually keep from smoking. And they weren’t always like this! My dad tells a story about how he saw one commercial when was a kid and managed to convince his father to give it up, so clearly something’s changed. Maybe if more anti-smoking ads were like Carlos Machiori’s The Drag they’d have more success. Or, at the very least, more Oscar nominations. 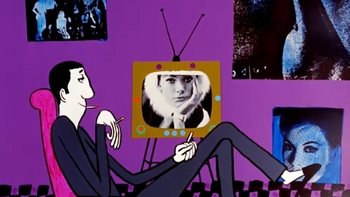 The Drag is a 1966 short coming to us from our old friends at the National Film Board of Canada. It tells the story of an anonymous man who tells his therapist the story of how he became a smoker. What started as an adolescent desire was reinforced by advertisements in the media (often represented by clip art, which is a bold and effective choice), up until the man learns about the horrible side effects of his addiction. While I can't speak to its efficacy as a public service announcement, I can at least discuss how well it works as a piece of entertainment. And in that regard I can say it's pretty damn good! The film is stylish and witty, delivering its message directly without ever becoming didactic or dull. Sure, no one likes to get preached at, but if someone manages to deliver a lesson in the guise of a fun cartoon, well I suppose there's no harm in that, right?

I think it's safe to say that The Drag is quite possibly the most 60s film we've ever covered, and I mean that in the best possible way. The most obvious 60s element is the score, a constant swinging chorus that wouldn't sound out of place in an Austin Powers movie. It's a great fit for the short, filling the whole film with a fun and silly energy which never lets the pace drag. The animation seems distinctly 60s too, although I can't really find the words as to why. It's just something in the way they move, you know? Sort of a quasi-limited animation style but with thicker lines and ridiculous proportions, perhaps. I don't know, I could be speaking out of my ass on this one. (Once again, anyone who thinks that writing about cartoons for nearly an entire year will automatically make you more knowledgeable about them would be dead wrong.) At any rate, the animation looks nice, filled with bright colors and simple but pleasant visual humor. And like I said before, the use of clip art is an especially clever touch. Sure, it was probably at least partially done as a time-saving measure. But it's a brilliant addition nevertheless, reinforcing the film's themes about the media as well as giving it a unique aesthetic. And once again, something distinctly 60s about it, isn't there? Dare I call it Warholesque? Sure, why the hell not? It's my blog and I'll do what I want to!

I guess, in a way, one could fairly call The Drag a propaganda film. It is sponsored by the government after all, as part of a nationwide campaign to spread a message. Well if it is a piece of propaganda it's a damn good one, certainly one of the best of its ilk we've covered. And it's certainly better than the short which won the Oscar that year; The Drag has every bit of style present in A Herb Alpert & the Tijuana Brass Band Double Feature, but a lot more wit and a lot less obnoxiousness. At any rate, it's certainly an underseen film, and if you're in the mood for a blast from the past, I highly recommend checking it out. At the very least it's unique, which is more than you can say for a lot of the shorts we've covered. Even if the message is preaching to the choir, falling on deaf ears or anything in between, you can at least enjoy the medium for what it is.