I never really got into ballet. There are a variety of reasons for this, but I think it certainly didn’t help that my first exposure to the artform was The Nutcracker, which contains some of the most evocative music in history, and then sets it to scenes such as the main characters being given coffee. There’s a disconnect is what I’m saying. Still, it’s always something I’ve been a little curious about, if not curious enough to actively seek out. Of course, if all ballets were as trippy as Norman McLaren’s Pas de deux, I might make more of an effort! 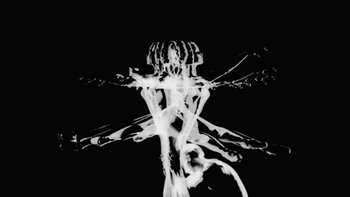 If the name Norman McLaren sounds familiar to you, it's because we've covered him a few times before, with Neighbors and A Chairy Tale. As you may remember, his works are generally pretty strange and experimental. Pas de deux (also known as Duo in the United States), released in 1968 through the National Film Board of Canada, might be the strangest of the bunch. Or perhaps it's the most straightforward. It's certainly the easiest to describe, yet the hardest to review. The short follows two ballet dancers (Margaret Mercier and Vincent Warren) performing the titular dance in front of a black backdrop. Which is already fairly interesting on its own, I suppose, if not particularly Oscar-worthy. But what sets Pas de deux apart isn't so much what McLaren filmed, but how he filmed it; or, to be more accurate, what he did to the film itself after filming wrapped. By using multiple prints of the high contrast stock, then staggering its printing, McLaren created a variety of captivating, strobe-like images. Then he set the film to some Romanian pan pipe music, just to complete the effect. I'll be honest, I don't really understand how he did it. But I do understand that it makes for a fascinating film!

Perhaps more than any film we've ever covered, Pas de deux is not an easy short to review. I know I've said so many shorts speak for themselves by this point that it probably feels like lazy shorthand, but really- this short simply can not be described in words! An absolutely mesmerizing film, Pas de deux can not be discussed in traditional filmic terms; it belongs to the world of high art, and should be analyzed as such. And since I have a hard enough time trying to sound smart when talking about movies, I'll leave the analysis to the eggheads on this one. Besides, some films are better experienced than dissected or understood. What does Pas de deux mean? I certainly don't know. Perhaps it doesn't mean anything. It doesn't have to. The film exists merely for the sake of existing, and few films have justified their own existence so well or artfully. Trying to understand it would only ruin the effect, in my opinion. This is a film made to wash over your senses, transport you into its world and haunt you long after the twelve minutes are up. As some folks on Film Twitter are so fond of saying- The style is the substance, the medium is the message. And few films exemplify that ideal like Pas de deux.