Earlier this year we looked at Ryan Larkin’s Walking, a rather strange and highly influential short. I mentioned at the time that my first impression of Walking was not a positive one, but that time and context helped me appreciate it more. And perhaps the most important ingredient in that newfound respect was today’s short, Chris Landreth’s animated documentary, Ryan. 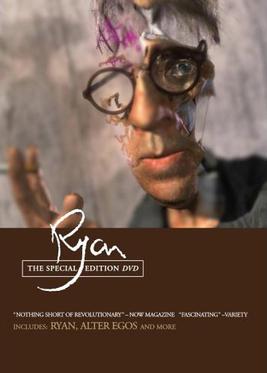 Although once considered one of the best animators of the 60s and 70s, Ryan Larkin fell on some hard times, struggling with cocaine and alcohol addiction, affecting his career and personal life. Larkin faded into relative obscurity, but fate intervened when he was selected to be a committee member for the Ottawa International Film Festival alongside animator Chris Landreth. (If Landreth's name sounds familiar, it's because we've covered him before. Stylistically, Ryan has a great deal in common with The End, albeit married to a more grounded story.) After learning Larkin's life story, Landreth came up with the idea to develop a short film about him for the National Film Board of Canada. Remember them? It's been a while! Initially planning to write a script based on a series of interviews conducted with Larkin, Landreth eventually decided instead to use the interviews themselves (specifically a later one in which Landreth asked Larkin directly about his alcoholism) as the audio for the film. The result is a strange, illuminating portrait of an artist, his work, and his mental health.

The thing about Ryan which sticks out the most, to me at least, is the animation. As we saw in The End, Landreth has a very strange, trippy style, utilizing the potential of computer animation to create truly surreal imagery. But whereas in The End that weirdness seemed to mostly be weird for its own sake, Landreth's aesthetic is now used for dramatic effect, creating portraits meant to reflect both the psychological states of its figures as well as Landreth's interpretation of the people within the short. Ryan is a short not only about mental health but mental processes in general, filtering the real life interviews through Landreth's subjective perception of them. It's an effective choice, and one that simply couldn't be achieved outside of the realm of animation. Beyond that, it elevates what would ordinarily be a series of conversations into a piece of surreal art. Combined with Landreth's bizarre sense of humor and willingness to experiment with form in both his animation and his storytelling, and you find yourself with a truly remarkable short. 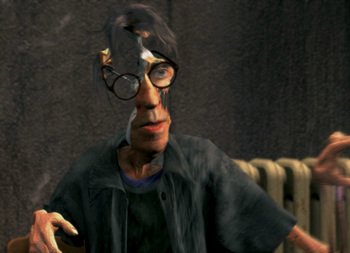 Of course, at the end of the day Ryan is still a documentary, and Landreth doesn't let his artistic ambitions interfere with the duties that come with that. Ryan is as informative as it is ambitious, explaining both the significance of Larkin as an animator and the struggles he faced after his initial success. The film helps contextualize Larkin's work in a way that makes it easier to appreciate, as well as providing a remarkably complex and tragic glimpse at the man he was at the time of the film's creation. Landreth's interviews with Larkin can be raw and uncompromising, but also funny and self-effacing. And even in this area, Landreth is able to play around with documentary form, intercutting interviews with other people into the conversations in a way that makes it seem as though they're interacting. Once again, the possibilities of animation are utilized to their full potential. The use of Larkin's work within the film is also cleverly done, especially the scene in which an animated Larkin interacts with his own film. I also found it interesting how willing Landreth was in including himself in the short; not just as interviewer, but as a human being with his own vested interest in Larkin's health and personal reasons for doing so. Some might argue that this is inappropriate for a filmmaker, that a documentarian's job is to remain objective. It's a long-standing debate, and one that certainly won't get resolved here. But from my perspective, at any rate, it seems almost impossible for a filmmaker not to get involved in their film. Even the most unbiased of documentaries still reflects the worldview of the people who made it. Landreth putting so much of himself into his work is arguably more honest.

Ryan was an immediate critical success upon its release at Cannes, garnering dozens awards from a variety of film festivals. And perhaps more importantly, it had some impact on the life of its subject as well. Ryan Larkin found himself more popular than ever, and soon began work on another animated short, Spare Change, as well as appearing in a documentary and animating some commercial bumpers for MTV Canada. Unfortunately, Larkin's death from lung cancer in 2007 meant he never lived to see Spare Change completed, but at least he got to create something again. It should come as no surprise that Ryan won the Academy Award for Best Animated Short that year. And while I think I slightly prefer Lorenzo, it's really hard to begrudge it the win. Besides, as Larkin himself points out in the documentary, Walking lost the Oscar to a Disney short; namely It's Tough to Be a Bird, currently unseen by me. So I suppose there's some justice in knowing that a short about Ryan Larkin got to beat a Disney short all those years later.